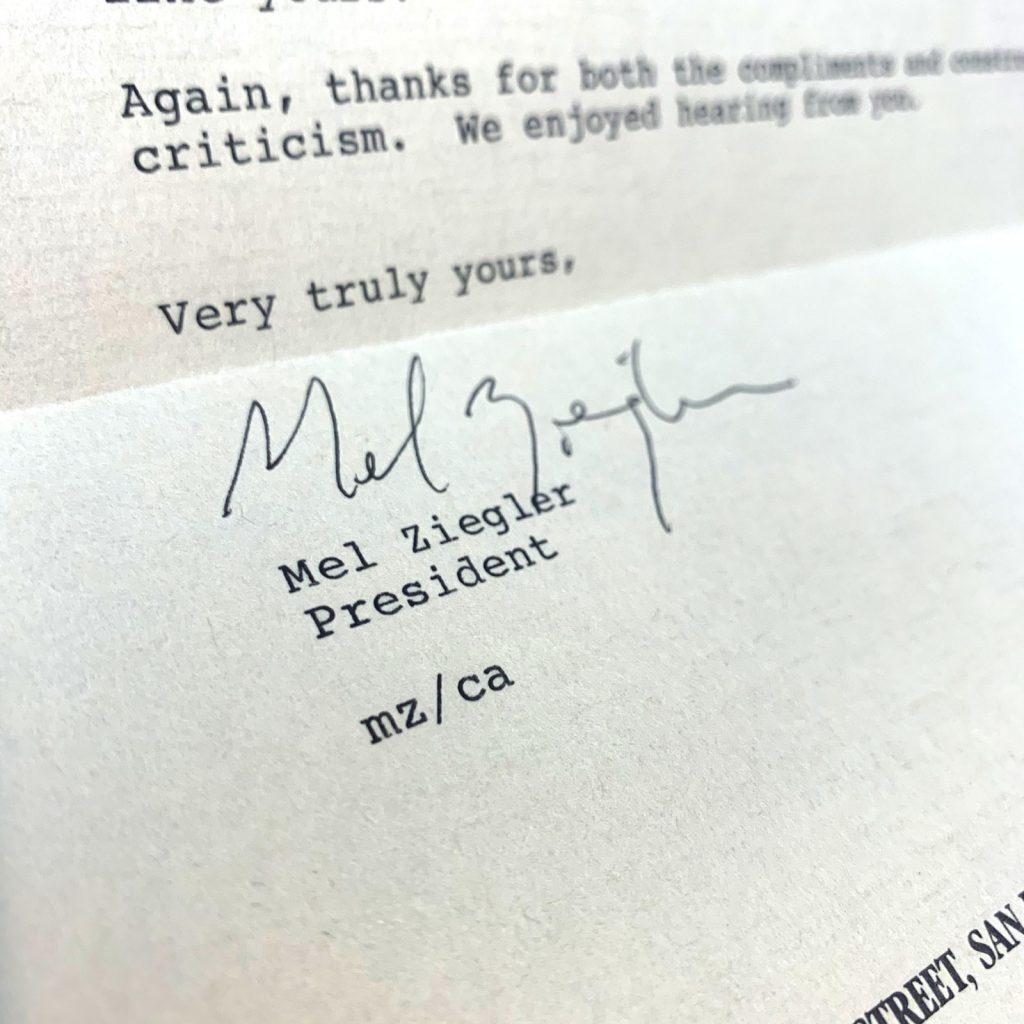 I jumped at the chance to buy a 1986 Mel Ziegler letter on BR letterhead and I’m really glad I did. First, it’s just a great look at what a classy company they were and how Mel’s gift for language never fails to charm. It’s so warm and witty. Secondly, this particular letter points directly to a slight but important change made in the catalogue copy for the leather Flight Jacket. For both authenticity and thrilling minutia this letter fulfills all of my geek needs.

The writer, a Mr. Doug Marshall from Ohio, is one of a number of WWII vets who had written in to dispute a detail in the write-up for the jacket. The line in the catalog is “…and there were no handpockets, presumably because said appendages are occupied when you are aiming a P47 at the flight deck of a carrier.)” Apparently, it is wrong to imagine a P47 fighter plane landing on an aircraft carrier in WWII whereas a “Hellcat” would be correct. (Don’t ask me!)

Mel thanks him for the constructive criticism in the most charming and self-effacing manner and points out the copy is corrected as of the holiday 1986 catalogue. (See before and after catalogue pages below)

The letter goes on to comment on the possibility of a children’s line as well as some insight into their strategy for adding new stores in areas where catalog buying is strongest.

You can see in the letter’s signature line the note “mz/ca” for Mel Zeigler and Christie Allair. Thanks to my friend Scott Dodd who pointed me to this passage in the Wild Company memoir: “… we were getting outsized positive feedback from all over the country; hundreds of letters from customers every week. Because someone had taken the trouble to write, each letter, whether it offered an idea, an observation, or a compliment, required a thoughtful answer…A charming, witty friend, Christie Allair, worked with me to answer every letter.”

Here’s the letter in full:

Thanks for your letter. We indeed heard from an incredible number of WWII carrier pilots and flyers who pointed out the folly of attempting to land a P47 on a carrier. We would consider it a kindness if you didn’t press us for the exact number.

No doubt you’ve received our holiday catalogue by now and noted the corrected Flight Jacket copy. We may err occasionally, but never for long governed by the astute readership you represent.

Although we haven’t any immediate plans to offer children’s wear, it’s obviously a market for consideration. Presently, we’re opening new stores in areas that have generated the greatest mail order response. Eventually, we hope to reach more communities like yours.

Again, thanks for both the complients and constructive criticism. We enjoyed hearing from you.