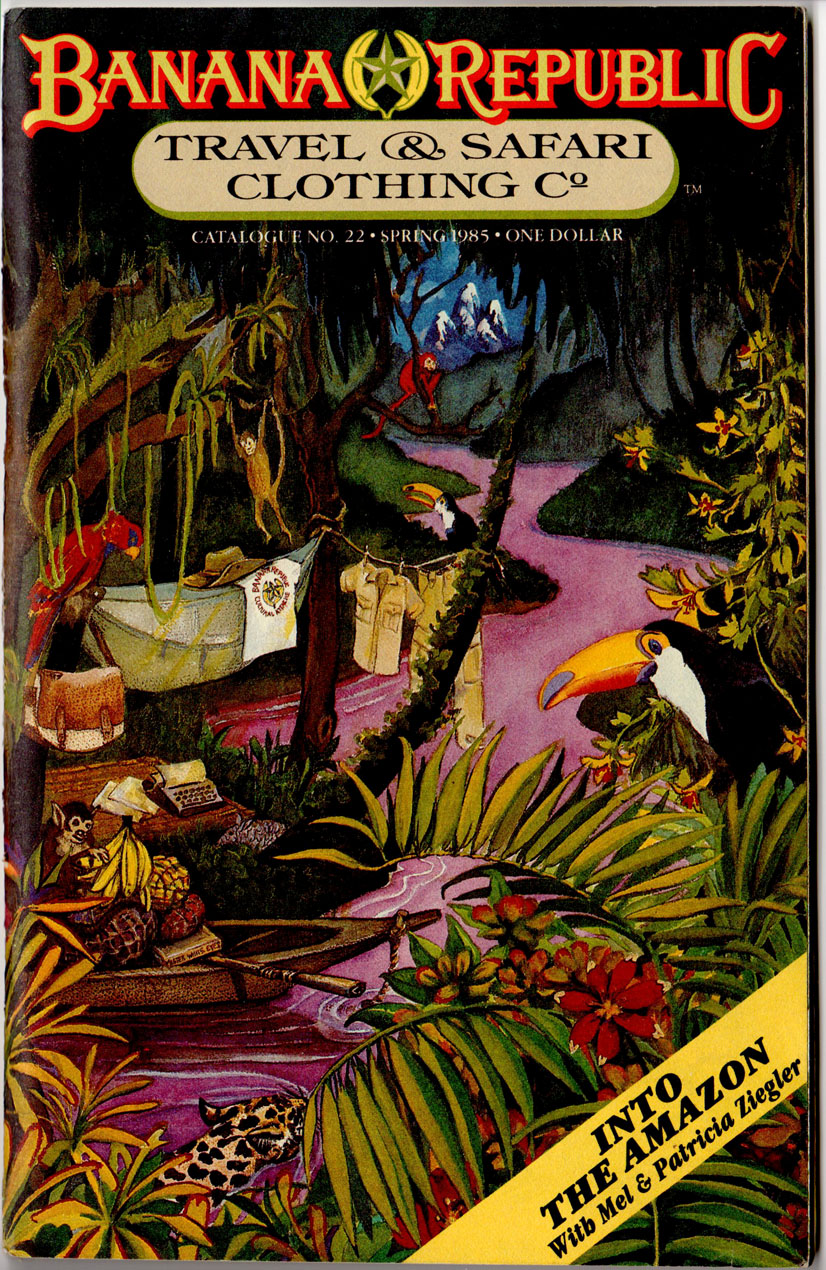 This is the second catalog that features a travel journal from BR founders Mel and Patricia Ziegler. The first was #19, their African trip. This voyage to the Amazon follows the same format: The journal is written in yellow sections on the sides of pages throughout the catalog and Mel’s text is accompanied by Patricia’s watercolor illustrations done on the trip. The cover is done by Patricia as well, and it was the last one she did. This cover is a really great one, capturing the lush setting with an air of mystery and whimsey and with a strong color palette, particularly the bold color choice of the purple river.

The travel journal itself is surprisingly rugged. It’s filled with so many unpleasant details…Chiggers! Poisonous plants! Venomous ants! Murderous rain showers! The fangs of the fer de lance! Shamans that kill with their MINDS! Toe-eating vampire bats! and finally…the inevitable lament about the vanishing rainforest. 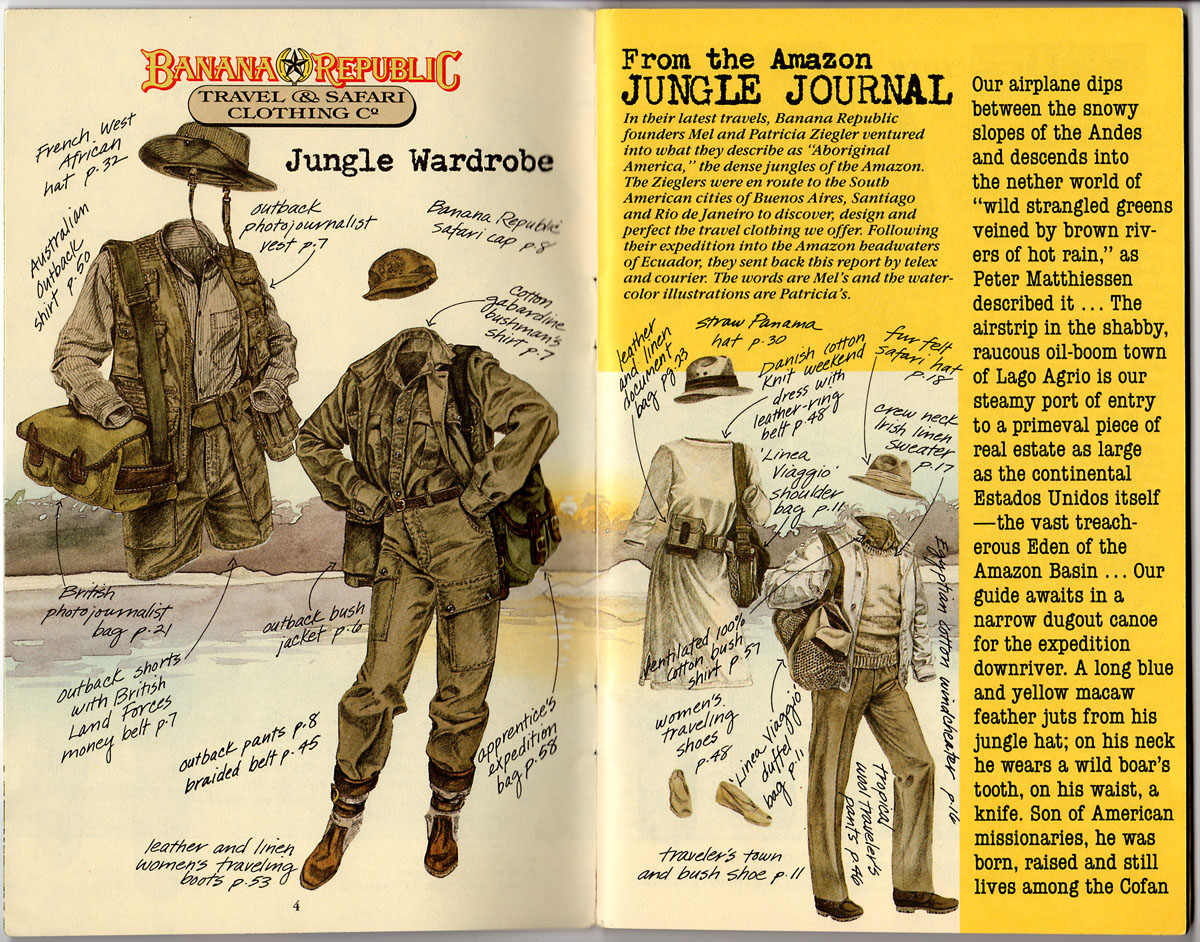 As far as product goes, this catalog represents a great leap forward from the previous 48 page Christmas catalog. This is 64 pages and is packed with new offerings. 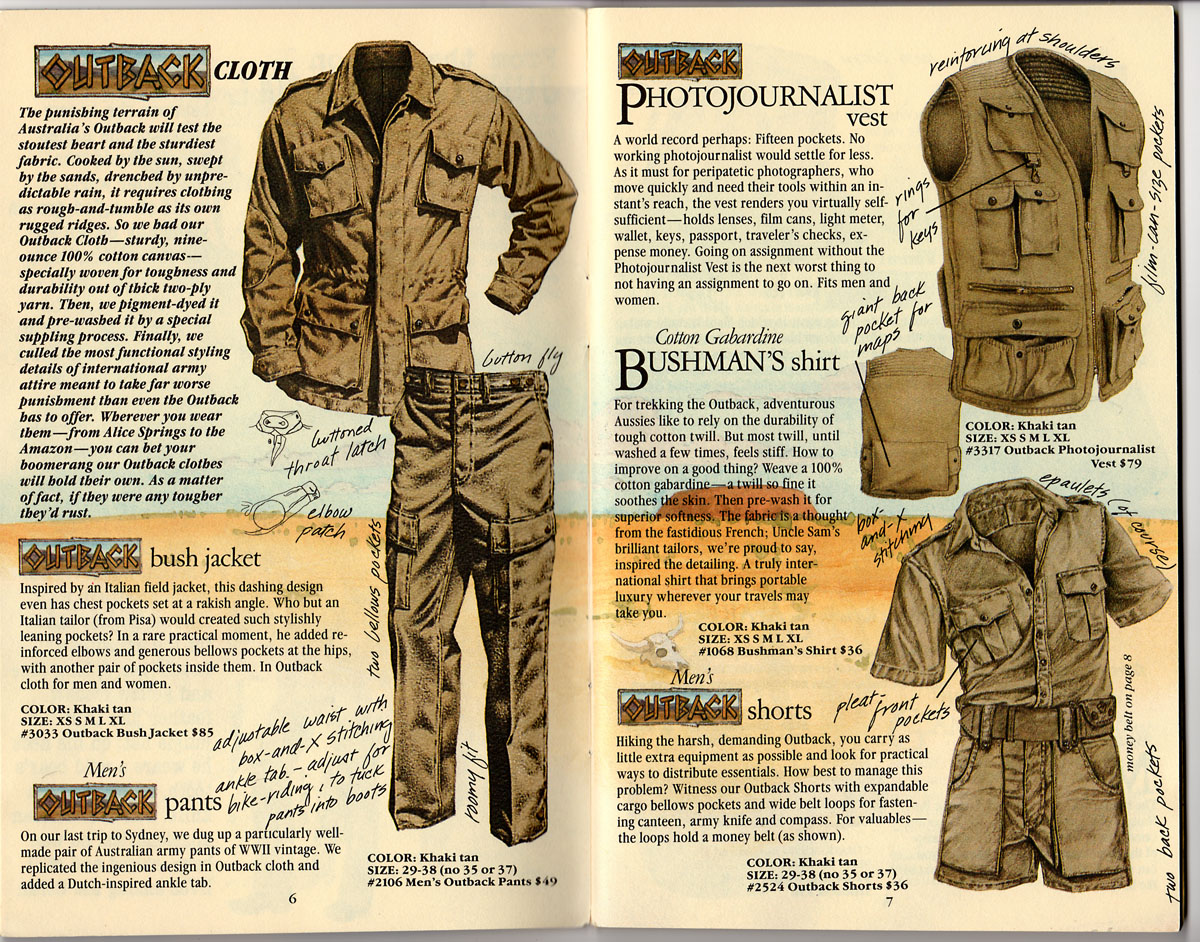 The Bush Jacket has been redrawn with more contrast and photorealism and has been rebranded as an Outback Bush Jacket and now has a matching pair of pants. The Photojournalist’s Vest design is continuing to evolve, having gained several new pockets and taking on a more familiar form. (Compare to Catalog #21). 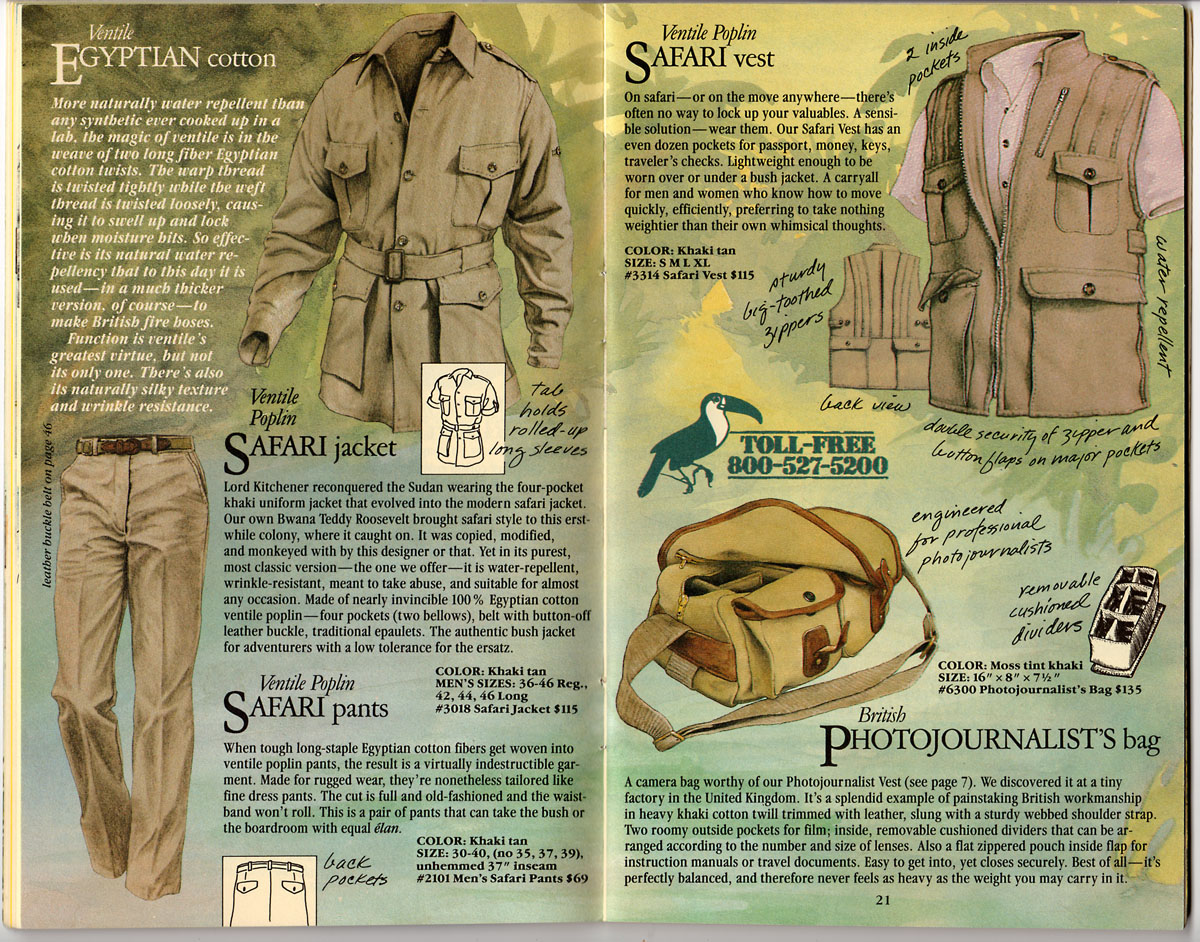 Actually, if you look closer at this gorgeous set of pages for the Safari line, you can see that what was once the Photojournalist’s vest has been named the Safari Vest. This full bleed watercolor background is also a new look for Banana Republic catalogs. 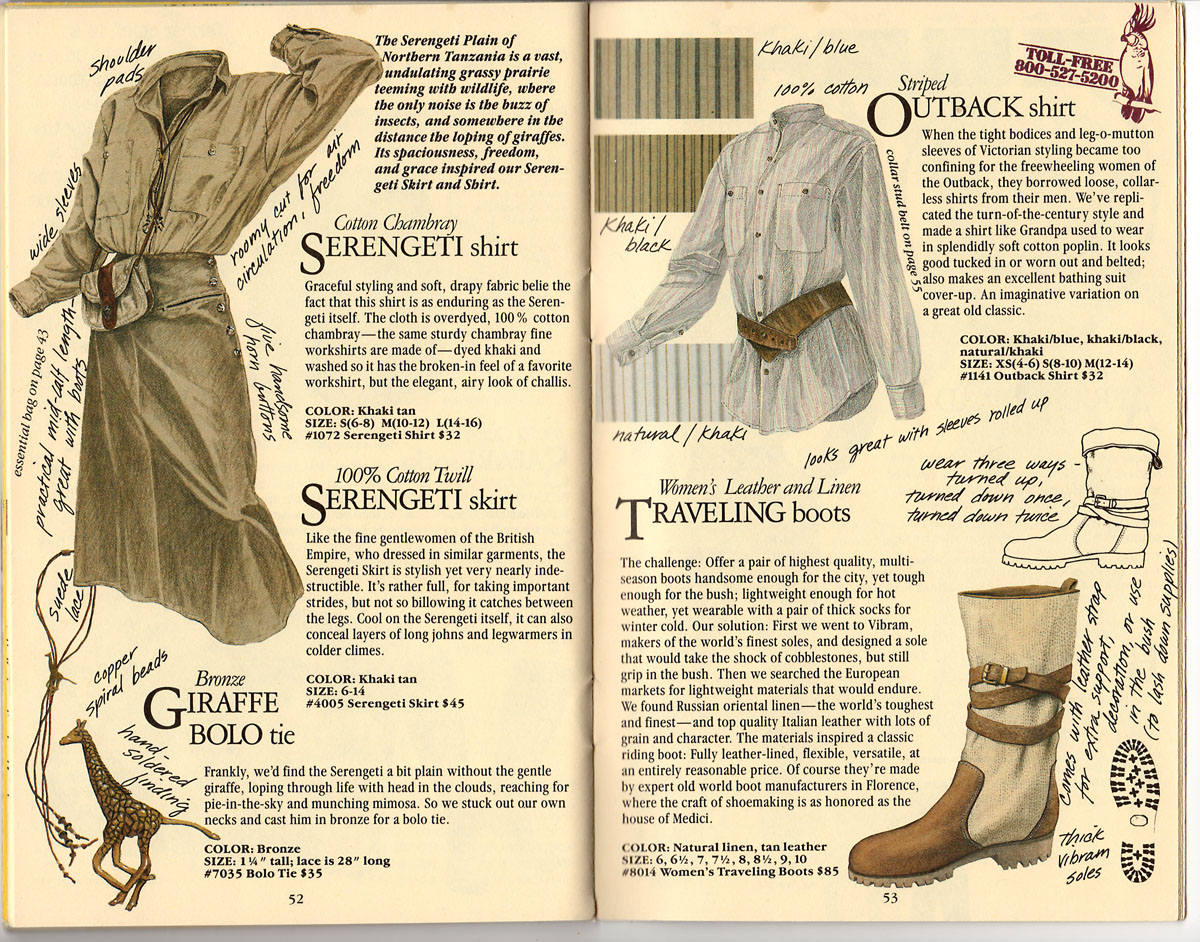 Here’s some new women’s clothing, the Serengeti look is very hot. Out of Africa will debut the following December, and BR will be waiting. I think this is also the first appearance of the Leather and Linen Traveling Boots. 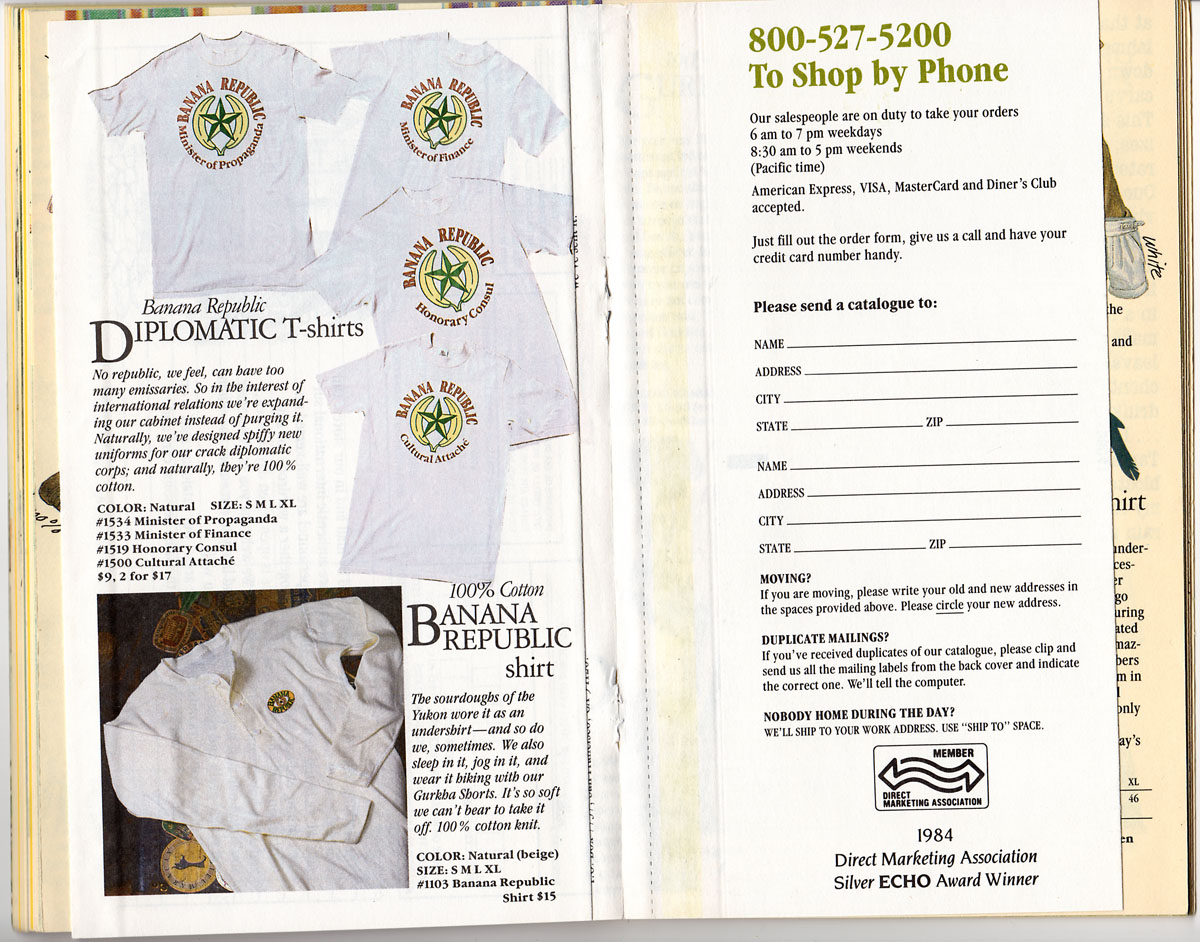 This may be the first sighting of the Diplomatic t-shirts, though this design is not as familiar (or attractive) as the later version. 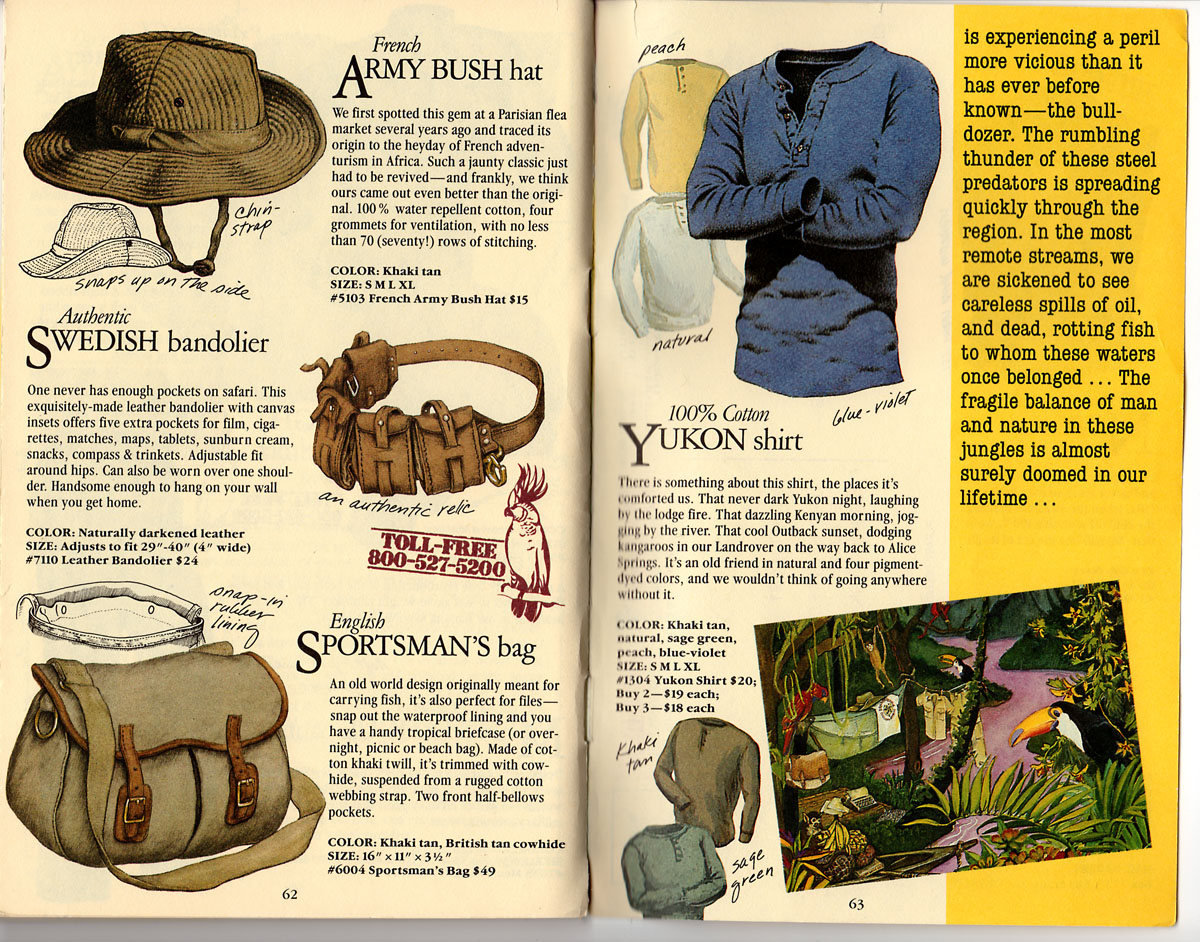 Check out the horizontal version of the catalog cover that they’ve used as a spot illustration here. Some kind of cropping and shifting went on there.

That’s it for this catalog. Please browse through the pages below and see what you discover. My plan is to come back soon with Spring 1986 and see if we can’t cover all the spring catalogs before this summer rolls around. Happy Spring!