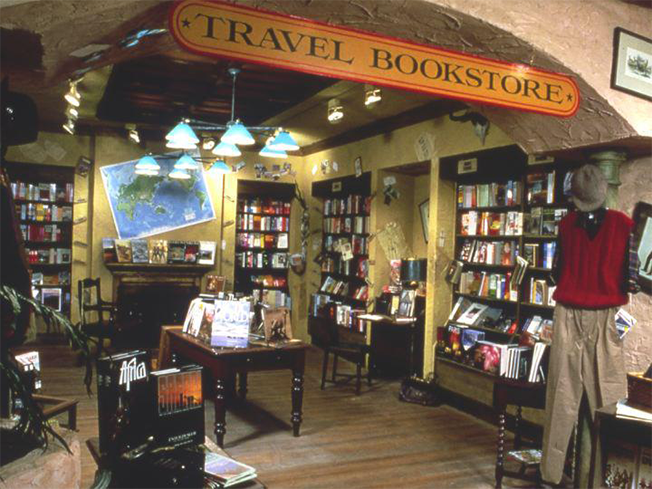 Banana Republic launched the Bookstore Catalogue in 1986, and there were five editions in total, the last coming in 1988. At the same time, bookstores were opened in select Banana Republic stores, the first being at the Mill Valley location before moving into the basement of the San Francisco Grant St. flagship store. The masthead of the catalogs indicates Bookstores in SF, New York, Washington, DC, Chicago, Houston and Philadelphia, though many others, if not all stores, had a bookstore section. The bookstores and 40 page catalogs offered a wide selection of travel guides another books, arranged by geographical regions.

As Mel Ziegler describes it in the Bookstore Catalogue introduction: “When Patricia and I founded Banana Republic eight years ago, it was our dream to one day see it evolve into a total resource for the smart traveler. After we developed our clothing business–with a good deal of help and encouragement from our literary and artistic friends–we decided that creating a unique selection of travel books would be our next priority. So it was that our Travel Bookstore was born.”

“As we do with our clothing, we cater to “immersion’ travelers–literate, individualistic, independent, open-minded men and women who are curious, willing to explore, eager to experience–people who travel to broaden their lives, and wouldn’t think of going anywhere without first exploring by armchair, in the spell of thoughtful, evocative books.”

The bookstores offered an inviting place to settle in, according to Grant St. Bookstore Manager Tony Donato. “People read & the store allowed customers to stay in the bookstore with fire place, complete with Persian rug, old cushion seat, newspapers attached on poles hanging encourage customers to read. We divided each continent, with their specific countries, in their sections selling new & old maps, travel/info books, languages/vernaculars in cassettes, videos on travel & small souvenirs.”

Despite initial enthusiasm from GAP Chairman Don Fisher (as described in the book Wild Company), the bookstore (and subsequent Trips magazine) became a source of friction between the Zieglers and GAP management. They didn’t understand the connection of using books to sell clothes. There’s a quote in the New York Times profile where Donald Fisher complained that if he’d wanted to sell books he’d have bought Rand-McNally.