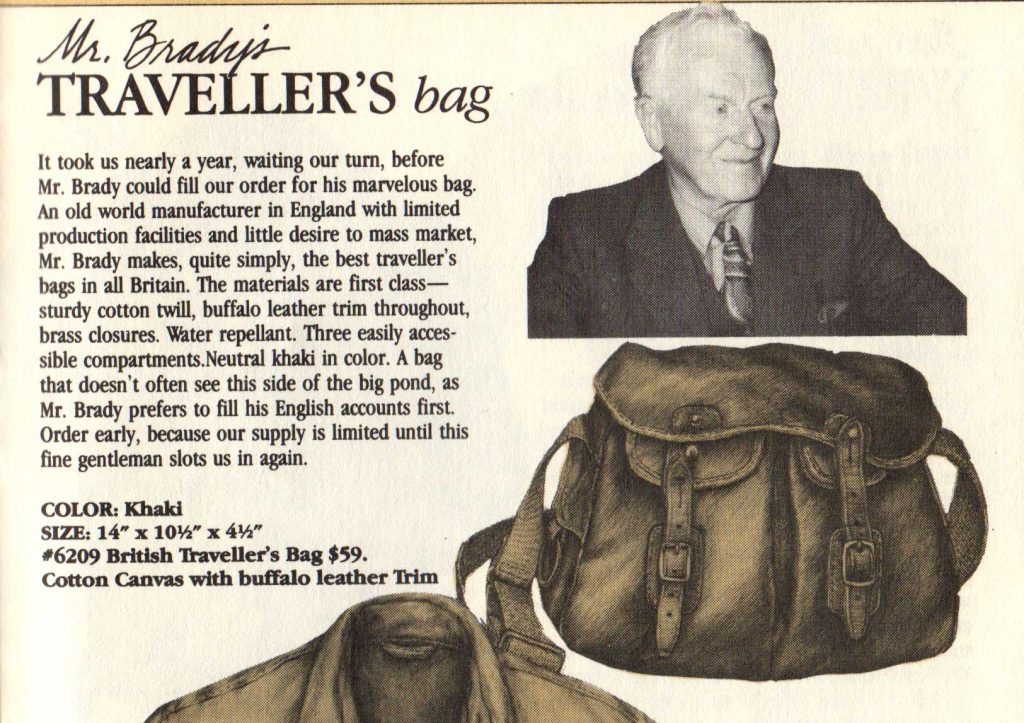 I recently set out to understand the differences among popular leather and linen English bags Banana Republic produced: The Low Profile Bag, The Correspondent’s Bag, Photojournalist Bag and Mr. Brady’s Traveler’s Bag. As is described in the Fall 1984 “Outfitters Who Outlasted the Empire” catalog the Zieglers contracted with many old English factories to produce their goods for BR. With some help from folks at the Abandoned Republic Facebook Page and a little internet searching I learned that the bags were made by two different traditional British bag makers, Brady and Billingham. Mr. Billingham founded his company in 1973, having been trained as a bag maker by Brady, which is a family owned bag company dating back to 1887. The two camera bags were made by Billingham and is still doing great business today selling similar bags as they made for BR called the Hadley.

In their book Wild Company they discuss their trip to England to buy product from a variety of traditional British manufacturers from sweaters, to ventilated shirts, to wax waterproof clothing. They were introduced to the Brady company by Richard Walker (for whom the pants were named). They describe Mr. Brady as the “sexagenarian grandson of the founder, dressed in a tweed jacket and tie” who “oversaw a few dozen gray-haired craftsmen on creaking benches, attending to their ancient sewing machines.”

Brady was most famous for the “Brady Gelderburn”, which was used for fishing but was adopted by photographers as a camera bag in the 1950s and 60s. It’s distinctive wedge shape with a narrower top than bottom and it’s removable (cleanable) rubber lining are all in the service of carrying wet fish, but the Zieglers saw it as the perfect travel bag. They placed a large order and the Brady Bag became a fixture in the catalogues for a few issues. You can still buy the Gelderburn today as Brady is an ongoing modern company.

To make matters worse, they offered an “Apprentice’s Bag” AKA “The Apprentice’s Expedition Bag” that is virtually identical to the Brady Bag but is made with “modern techniques”. The Brady is Sage Tinted and The Apprentice is Moss tinted, presumably darker? Oh, Banana, you vex me so.

The Brady bag was made in two colors for Banana Republic over the years; Khaki Tan and Sage Tint Khaki. There is no Banana tag sewn into the bag, only a round leather tag attached with a chain.

Photos below from eBay. This is for a Khaki Tan version.

To read much more about these marvelous bags here are some great links: