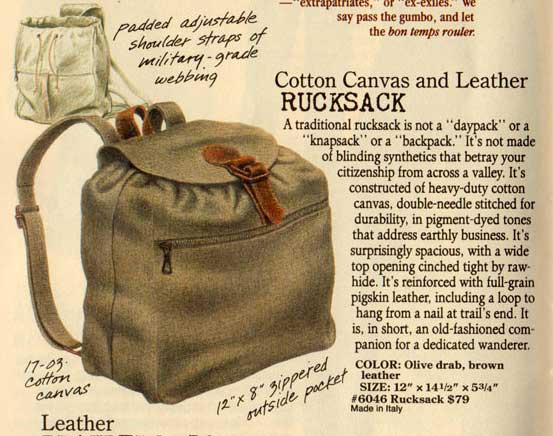 From the Summer and Fall 1987 Catalogues: “A traditional rucksack is not a “daypack” or a “knapsack”, or a “backpack”. It’s not made of blinding synthetics that betray your citizenship from across a valley. It’s constructed of heavy-duty cotton canvas, double-needle stitched for durability, in pigment-dyed tones that address earthly business. It’s surprisingly spacious, with a wide top opening cinched tight by rawhide. It’s reinforced with full-grain pigskin leather, including a loop to hang from a nail at trail’s end. It is, in short, an old-fashioned companion for a dedicated wanderer.”

Photos courtesy Jerry Rose, who reports, “It’s been Down the Grand Canyon at least four times. Was my book bag in college. Its slept on the beach in Mexico. Rode the train to Mazatlan. It made due as a diaper bag for my four sons and the blood stain in the bottom is from being used as a game bag hunting quail, pheasant and dove. Probably a trout or two have been in there as well.”

This example has been well-used and is missing the leather clasp at the top.

No sooner than Jerry sent in his well-worn Rucksack, Wendy Joffe submitted pictures of her nearly new example.

“In this first message, I’ll include images of the rucksack with some closeup shots, such as the “padded” shoulder strap (really, it’s some leather that’s sewn to the webbing; I suppose it’s a help, but surely not like the super-padded straps of my trusty Jansport daypack I lugged around campus).  There’s also a pic showing a selection of reading materials one might entrust to this sturdy sack.  The map of New Zealand’s South Island and the book, “Tracks,” by Robyn Davidson, I purchased from the Travel Bookstore catalogues.  The little “Handbook for European and Oriental Travelers,” published by the United States Express Company in 1896, is chock-full of advice for the transatlantic traveler.  For example, clothing made of sturdy wool serge is recommended for the sea voyage, and ladies are advised to weigh the hems of their skirts with lead shot to avoid any embarrassment whilst strolling the promenade deck in gusty weather!  Well, times have certainly changed for the better.”

Wendy, , modeling the Rucksack for the sake of scale.  “I’m not a big person — just under 5’4”, so this pic is meant to give an idea of how the bag fits a smaller adult.  I had a lot of fun assembling the outfit, which includes a Women’s Fedora from ’88, much-loved Bush jumper dress (bought that in ’84/’85), Yukon Shirt, Brass Buckle Belt, and an Elephant Bandana, of course.  I received a fair bit of gentle teasing from the family — “You look like you’re going on an expedition of the Amazon, but staying in the boat and looking quite uppity!””