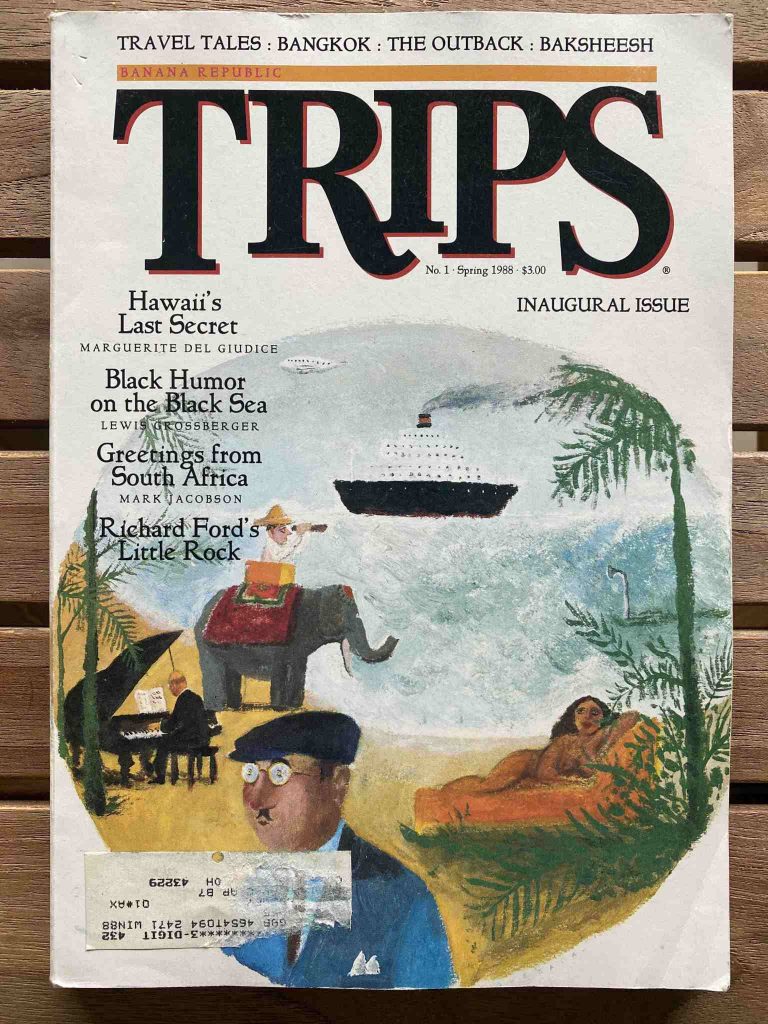 This article is a guest post by writer and Banana Republic fan Neal Moore. Our deepest thanks to Neal for allowing us to republish this article and the photos from his collection. Follow Neal’s adventures at 22 Rivers.

I picked up my first copy of TRIPS magazine at a “safari & travel” Banana Republic store of yesteryear. I was a kid, it was the late 1980s, and I can say – as oddball as this might sound – that I’ve spun the globe with it ever since. Its mantra of what travel can (and should) look and feel and taste like, open-mindedness-wise, sense-of-curiosity-wise, and being-alive-wise – “to get as deep inside a culture as constraints of language and understanding will allow” – has helped form my take, my very own spin on this world.

There was only ever one issue produced – so the Spring 1988 edition serves as both the debut and finale edition. I’ve lost my original copy a long time back and have since given away many more, so I try to snag one every chance I get (thanks eBay). I like to think of TRIPS as a bible of adventure, a relic of expedition, and an unadulterated view into the “safari & travel” vision of Mel & Patricia Ziegler, founders of the long-abandoned original Banana Republic.

The Zieglers, both retired journalists with the San Francisco Chronicle, hired their friends, established ink-slingers to write the magazine’s copy. It was clearly a labor of love.

Flip the pages, and the articles will transport you in search of the soul of Hawaii with National Geographic journalist Marguerite Del Giudice; hurl you into Apartheid-era South Africa with Rolling Stone, The Village Voice, and Esquire writer Mark Jacobson; bike alongside His Majesty, the King of Tonga with screenwriter, actor and novelist Charlie Haas; and Ride to the Back of Beyond of Australia with photographs by Hakan Ludwigsson and text by Newsweek’s Tony Clifton.

The magazine was likely the first to introduce The Thorn Tree Forum into print, an idea picked up and popularized by Lonely Planet eight years later in 1996.  “…It was, effectively, Kenya’s first postal system,” explains the Zieglers, referring to an old thorn tree in the courtyard of the New Stanley Hotel in Nairobi where travelers used to pin their urgent, cryptic messages. “We borrowed the name for this column. Items will be culled from letters, news clippings, documents, anything concise and interesting that crosses our desk. Travelers’ tales, tips, observations, complaints, and cultural artifacts are welcome.”

To get the oddball rolling, first-hand travel tips from veteran travelers were offered – from “How to turn a golf ball into a drain plug for overseas bathtub,” to “Create a travel journal as you go: Mail postcards to yourself!”

I love them all – the sketches, the travelogues, the photos, the irony, the off-the-beaten-track discoveries. One of my favorite travel tales, penned by Sports Illustrated/human interest writer Gary Smith, whisks the reader onto a Portugal-bound train chockablock with banana and fish smugglers.

I’ve hiked with TRIPS across Tigray, Ethiopia, adventured with it into the dusty dorps of the Klein and Groot Karoo of Southern Africa, listened to the call to prayer with it in Islamic West Luxor, and I’ve gotten lost with it the back alleys of Bangkok, Hong Kong and Taipei — all places I’ve called home. These days, I find myself canoeing with this tried and trusty and true companion across America, most days carefully stowed away in my dry bags, and on days like today, taken out to peruse and inspire.

After all this time, the magazine remains a jolt to the system. It hurls one back to a now-bygone era when travel was fun – to the late 1980s, to be precise, before Banana Republic was taken over by the Gap – when the company had a climate desk “so that no matter which way the wind blows, you’ll arrive becalmed,” along with a travel bookstore, “to attract the ambitious adventurer – with or without armchair.”