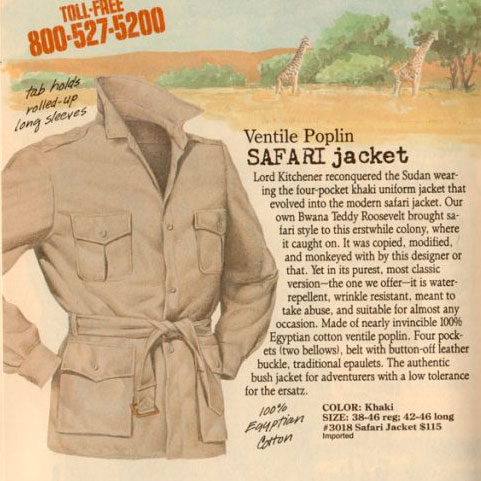 Beginning with this first Bush jacket offered in 1979 Banana Republic always had some form of safari style jacket. Catalog number 3 in Spring 1980 carried some “limited supply” of a surplus “safari antique” that had been found in Australia. The fabric is described as a light tropical cotton weave. They must have been frustrated to run out of this safari classic.

The following catalogue for Fall/Winter 1980 brought the very first “Kenya Safari Jacket” at nearly double the price of the poplin Bush clothes. These were sourced from an outside manufacturer, Willis & Geiger.

Spring 1981 brought a full line of Kenya Safari clothes and the first appearance of the Safari Clothes manifesto: “We are a safari clothing company. All our energy is directed towards finding and designing quality safari clothes. Safari jackets and safari pants are the key elements of the safari wardrobe. The reason we offer Kenya Safari Clothing is because, frankly, we’ve scouted from one end of this globe to the other and have never found any better, at any price.”

According to Patricia Ziegler, the Kenya Safari line was manufactured for BR by famed American outfitter Willis & Geiger.

This is a Kenya safari Jacket made for Banana Republic by Willis & Geiger. It has the early tag which dates it to 1982-84 and it says Made in USA. The design appears to be identical to the later, more common Ventile Poplin jacket (further down). The key difference is the early large Mill Valley label.

Manufactured by Banana Republic in The British Colony of Hong Kong,, the Ventile Poplin Jacket (and pants) debuted in Fall 1984: ” As the premier, pre-eminent purveyor of safari clothing, we are forever circling the globe, scouting for exotic, highly functional natural fabrics. We take pleasure in now re-introducing and old fabric gem we recently rediscovered in the British Isles–Ventile Poplin.” The copy goes on to explain the particulars of the weave that cause it to swell and repel moisture when it gets wet as well as the silky texture and wrinkle resistance.

I believe the “Ventile Poplin” safari line represents perfectly the manufacturing power of the GAP with the imagination and exacting standards of the Zeiglers. These were clothes they had always dreamed of making and the infusion of money and know-how from the 1983 sale to the GAP allowed them to create their own safari clothes at last.

In the Wild Company memoir the Zieglers discuss their first safari trip to Africa in 1984 and marvel at the “Cheaply made, misshapen, ill-conceived, impractical, shiny polyester safari clothes….Only erstaz safari garb can be found in Nairobi. We in California are the default source for the best selection of the real thing.”