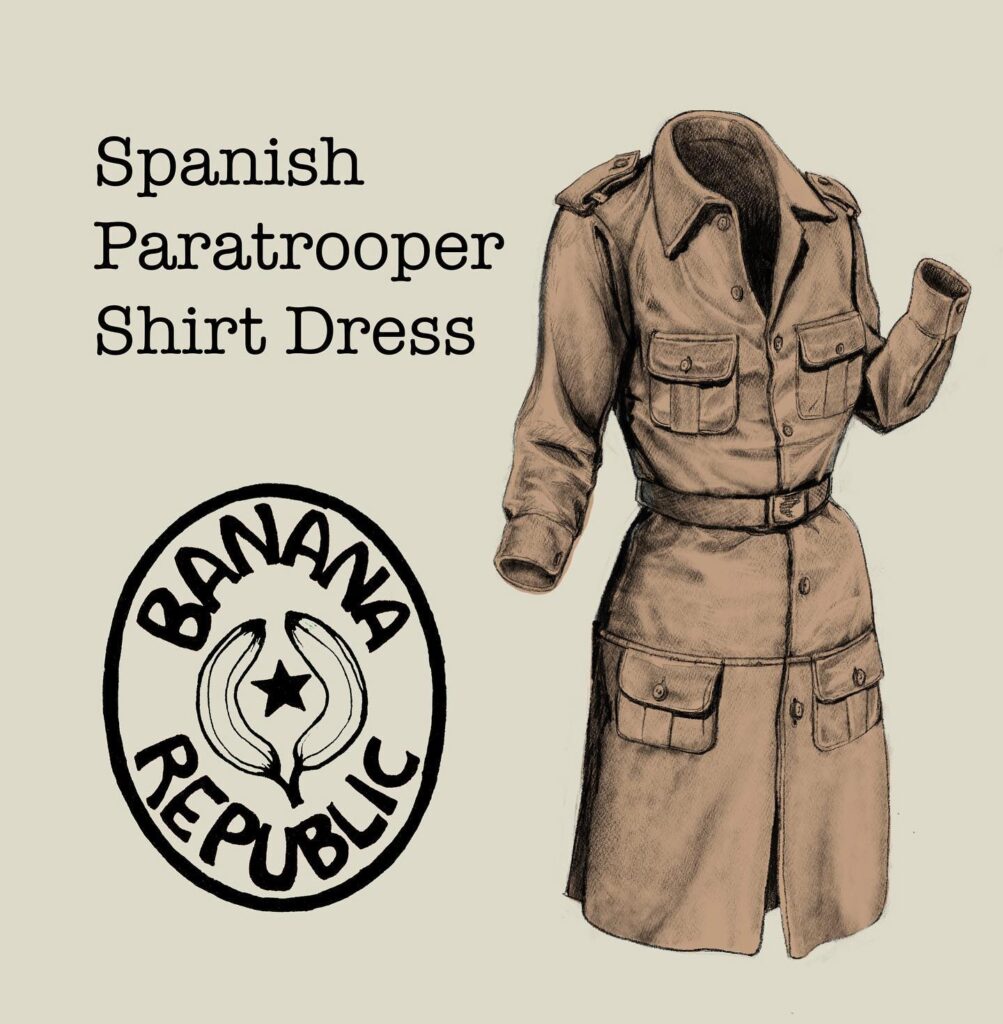 To see a relic from the founding moments of Banana Republic is a really special thing. So much so, at one point I mentioned to Patricia Ziegler that I’d “KILL to find a Spanish Paratrooper Dress”. Months later, she sent a message: Patricia HAD one in her collection. She asked if I wanted it! Days later it arrived on my doorstep, along with everything else in the Big Box from Mill Valley.

The Spanish Paratrooper Shirt Dress was in the very first Banana Republic Catalogue released in the winter of 1978.

The story of the Short-Armed Safari Shirt is part of the Banana Republic legend: After purchasing a mountain of surplus shirts from Spain, the Zieglers discovered to their horror that the arms were unusually short. Mel concocted a whimsical story to explain that maniacal Franco the Spanish Dictator insisted they be made that the way. Disaster turned to inspiration and the BR formula was born. They combined clever copy with hand-drawn art and started the catalog that would make them famous.

On the opposite page from the shirt is the Spanish Paratrooper Shirtdress which combined two shirts into one garment. “For busy, adventurous women who prefer tailored, no-nonsense clothes.”

There’s several things to note in the catalogue entry for the SPSD. One, it mentions red felt insignias on the removable epaulettes. These are not present on mine, nor does Patricia recall that detail. Note the dress came in both Khaki and Olive. It came with a 2 inch olive canvas belt, but I do not have the belt.

The Spanish Paratrooper Shirt Dress, a gift to Abandoned Republic from Patrica and Mel Ziegler. This was her own dress!

This is the patch that customers could request be added to the sleeve of their Spanish Paratrooper Shirt Dress or Short-Armed Safari Shirt we mentioned in the 1978-79 catalogs. This Coat of Bananas logo was also affixed to a bag called the Diplomatic Pouch or a Safari Cap. I’ve never seen one come up for sale, this photo is courtesy Patricia Ziegler.

Note the second set of pockets are shorter than the first. An attention to detail that no doubt required extra effort.

Pocket detail on the 1978 Spanish Paratrooper Shirt Dress. In joining two shirts together, the easiest approach would have been to leave the pockets as they were originally constructed. Patricia made the design decision to make the bottom pocket about half the size of the chest pockets, so the hired seamstresses had to partially rebuild the pocket. Another fun fact: these dresses came in khaki and olive!

This is all the labeling there was on this. The Catalog#1 mentions that the dresses sewn by the local seamstresses included a tag that said “Re-Made in the Banana Republic”. I do not believe BR had their own labels at this time.

Catlogues 2 and 3 both offered a similar shirt dress/ coat dress, but they are not the same item.