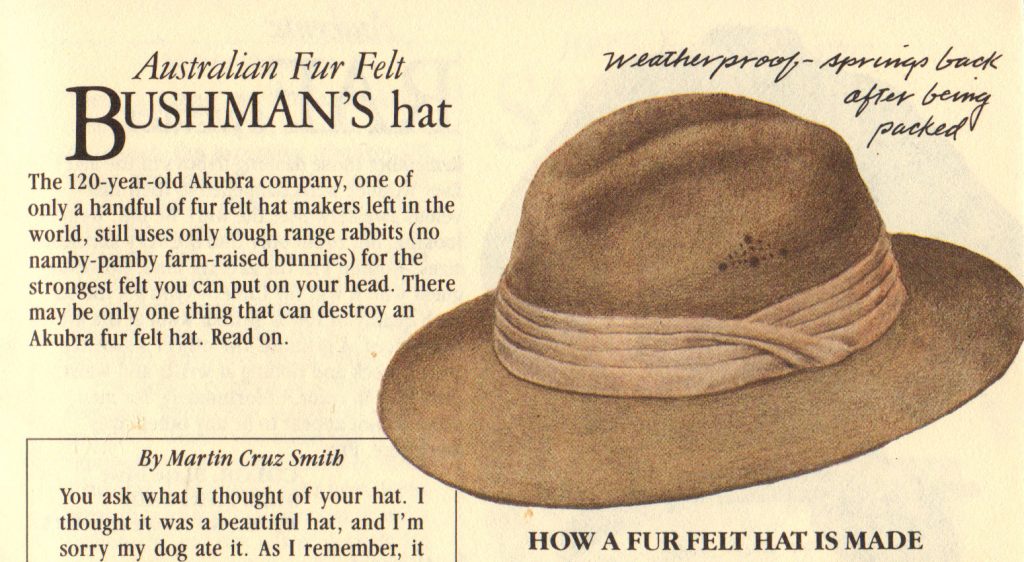 From the 1984 catalogue: “The 120-year-old Akubra company, one of only a handful of fur felt hat makers left in the world, still uses only tough range rabbits (no namby-pamby farm-raised bunnies) for the strongest felt you can put on your head. There may be only one thing that can destroy an Akubra fur felt hat. Read on.”

By Martin Cruz Smith: “You ask what I thought of your hat. I thought it was a beautiful hat, and I’m sorry my dog ate it. As I remember, it was a full-brimmed hat, waterproof, a light coffee brown color, of pressed rabbit fur. I think it was the fur that drove the dg to sombrerocide. When I did wear the hat the single morning I had the hat, people complimented me and wheedled for a chance to wear it.

“It’s a safari hat,” I told them. “Are you going on a safari?” they asked. (A handsome hat puts people in a convivial humor.) “Out to the hot tub and back,” I said, making an “inside joke” among Californians who don’t have hot tubs. In fact, Californians who don’t have hot tubs have the furtive suspicion that they are missing the whole point of being on this side of the Sierra. The hat sort of set this straight, being pressed rabbit fur and all. The rabbit fur hat as “state-of-the-art” is even better than the graphic equalizer on a Saab stereo. I will not stoop to the suggestion that women fought to stroke my brim, that I leave to your advertising agency. In literary terms, beginning as “Water Mitty”, ending as Cujo.