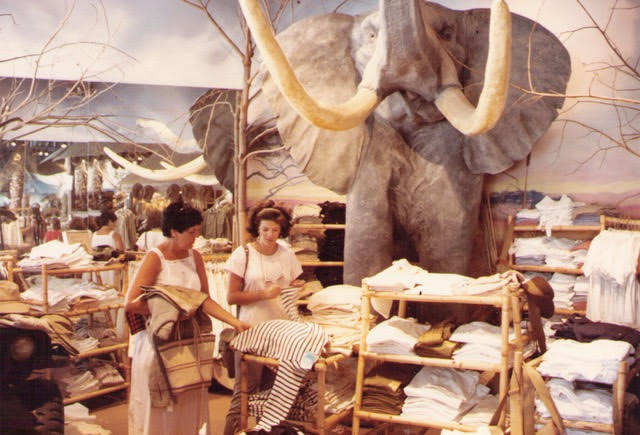 One of the great joys of running Abandoned Republic is when we attract the attention of former employees who are eager to tell their memories of Banana Republic Travel & Safari Co. Recent posts about the Beverly Hills store prompted Lisa Ihnken to get in touch with us. Lisa was at ground zero, working at the GAP from 1980-1982, she was there for the transition of the Beverly Hills GAP into a legendary Banana Republic.

Lisa shares her story with us:

How Banana Republic Took Beverly Hills By Storm – According to Lisa

“Banana Republic?” The Beverly Hills Gap store staff looked around at each other mouths agape.  At the front of the meeting, Gap Regional Stores Leadership representatives all nodded their heads in agreement.  “What the heck is that?” everyone wondered aloud.

“Gap acquired a Bay Area two-store operation called Banana Republic.  This Gap location will be closing end of next week, and after an extensive remodel of this space, Banana Republic will open its first Southern California location right here.”

None of the BH Gap employees had ever heard of a store with such a crazy name at the start of 1983.  That is, no one but me.  While I was unaware that Gap owners Don and Doris Fisher had purchased Banana Republic, I was familiar with BRs one of a kind surplus style stores: one in San Francisco and one in Mill Valley.  I am from the Bay Area and had shopped several times at the Mill Valley store, so I was THRILLED to learn that Gap had acquired them.  I immediately began visualizing the excitement of working for Banana Republic and couldn’t wait to join the staff.  An opportunity to work at one of the most unique concept stores I had ever experienced, the likes of which Beverly Hills had certainly never seen before. I was so stoked!

Except I was informed that Banana Republic would absolutely NOT be hiring on any Gap staff to work in the new stores.  “Our store’s concept and culture are the exact opposite of Gap’s.  We are looking to staff our organization with artists and creatives, and not cookie cutter corporate types.”  I heard this over and over as I applied for a role in the new BH location, but ultimately I would not take no for an answer.  Finally, tired of my relentless lobbying, the Banana Republic Operations and HR team decided they’d give me a chance.  While I waited for the remodel, I took a temporary position at a Gap in Century City.

It took Banana Republic’s architecture and design team with the help of Fisher Development about 6 months to remodel 9669 Santa Monica Boulevard.  The interior design was a replica of an African safari movie set:  artists painted the walls in the vivid colors of an African bush at sunrise, a sculptor build a giant life-like fiberglass 10 foot elephant in the back end of the shop. A wooden bridge was built to connect the middle of the store to the back, and it arced over a creek with actual running water flowing by.  Once the authentic bush airplane was installed in the ceiling over our front desk cash wrap, the foundation of BRs safari-style wonderland was complete.

Opening Day, a Friday in the Fall of 1983, was not without its challenges.  To begin with, it was POURING rain which as you might imagine is a rare event in Beverly Hills.  In addition, some of the more minor yet still important decorating details of the store were not yet finished.  We were supposed to open at 10am but at that time, our sales staff were still rolling boulder rocks into place along the windows and sides of the faux creek.  Despite a 6:00am call to report to work, there were several tasks still needing done, so the staff kicked it into high gear to finish our set-up, and a line for entry began to form in front of the store.  Word was out in Beverly Hills that the new shop Banana Republic was a provocative new retail adventure: shoppers would literally go on a shopping safari in a store stocked with unique travel clothing that could not be found anywhere else in town. And even more enticing- at prices considerably lower than anywhere else in town (move over, Rodeo Drive).  People were actually standing on line in the rain to get in and see for themselves. Finally by high noon, we unlocked the doors and curious shoppers began streaming in.

It was a madhouse.  We were totally unprepared for the crush of buyers and looky-lews who jammed all pathways around the store, making it impossible to pass from one side of the sales floor to the next.  At the cash wrap, the long line got even longer when we were startled by an unexpected surprise:  Gap had shipped us cash registers from Kentucky, but no one bothered to make sure they were programmed to charge the correct amount of sales tax (the sales tax rate there was about half what was charged in Beverly Hills).  We ended up having to write up all merchandise sales up by hand and using calculators for a few days until that oversight got rectified.

Banana Republic immediately captured the hearts of Southern Californians.  In a town built on fantasy, the Beverly Hills store reflected everything the capital of the entertainment world admired. The list of celebrity superstars I assisted alone was astonishing:  Paul Newman, Arnold Schwarzenegger, Harry Belafonte, Kareem Abdul-Jabar (!) Jeff Goldblum, Geena Davis….household names impressive even by Hollywood’s standards.  One afternoon dance legend Fred Astaire, accompanied by his then wife jockey Robin Smith (Beverly Hills residents) came in to take a look.  Our store music was all from the 1930s and 1940s, put together by hand on tapes that we played all day long.  As I ushered Mr. Astaire around the racks of photojournalists vests, he stopped me by putting his hand on my arm, smiled and said “Gee I didn’t think anyone played this song anymore,” as Cheek to Cheek could be heard in the background.

Opening Banana Republic Beverly Hills was truly an amazing experience.  Working alongside such talented artists as Mel and Patricia Ziegler alone is something I will forever be amazed to have taken part in.  I made some wonderful lifelong friends at that store who I will always cherish (big shout out to Louisa Voisine and Janis Hashe, super talented artists in their own right).  It is a shame that BR ended up turning into exactly what they insisted they were never going to do:  a corporate looking, glorified Gap national store chain.  But thankfully, I will always have my memories of the days when Banana Republic was truly a magical place.