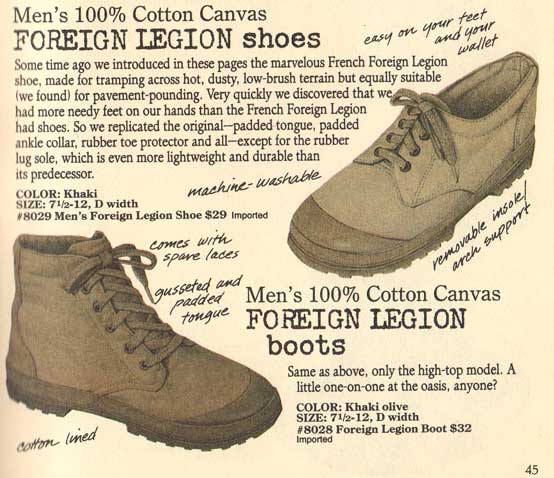 Introduced well before the Gap era, the Foreign Legion Shoe is billed as Mel Ziegler’s favorite shoe. The famous French Foreign Legion boot was made by Palladium and was called the Pampa, while the low-top version is an Oxford. Later on, the catalogue implies the shoe was replicated by Banana Republic (or made by Palladium for BR?) with some slight improvement of a lighter sole. Shoes and boots were made and these ran in the catalogue until Holiday 1987.

From the 1982 catalogue: “Made for the French Foreign Legion as footwear for hot, dusty, low-brush terrain, this shoe, we’ve discovered, serves an equally worthy purpose for those of us who pound a lot of pavement. The rubber waffle sole’s deep bite give you good support, yet packs enough spring to let you get up a good jaunty pace in the urban jungle. Our President Mel Ziegler will wear no other shoe for traveling in European cities (the sole evens out the shock of brick or cobblestone streets) or for thoughtful strolls down Telegraph Hill. The shoe has a stub-proof toe bumper, and the lightweight cotton duck upper is cut like a deck shoe. Has a small, waggles tongue, padded ankle collar and removable/washable hemp insole. This is a serious walker’s shoe.”