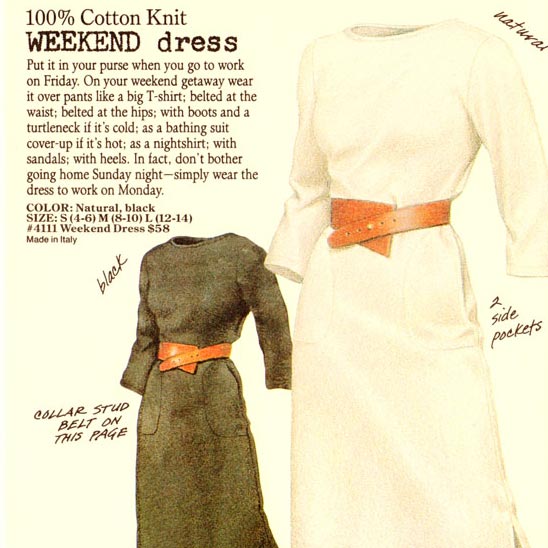 Available from Summer 1985 through Spring 1986, this dress came in Natural and Black and was as versatile as advertised. From the catalogue: “Put it in your purse when you go to work on Friday. On your weekend getaway wear it over pants like a big t-shirt; belted at the waist; belted at the hips; with boots and a turtleneck if it’s cold; as a a bathing suit cover-up if it’s hot; as a nightshirt; with sandals; with heels. In fact, don’t bother going home Sunday night-simply wear the dress to work on Monday.”

I was delighted when the WordPress robots told me about Cynthia Closkey’s 2012 post about the Banana Republic “Weekend Dress” that was inspired by my upload of the Soviet Safari Catalog.

It’s humorously accurate….”Banana Republic is nothing like this now, as we know. Now, it’s more like eternal casual Friday at a law firm.”)

…and thoughtful …”I hoped buying the right piece of clothing would cover for what I didn’t think I had. It took me a long time to understand that clothes don’t make the woman — the woman makes herself. But I do appreciate that that dress helped fill in for a short time.”

I love the fact that she and a commenter both have such fondness for dresses that they don’t think were very flattering on them. Check it out at My Brilliant Mistakes.