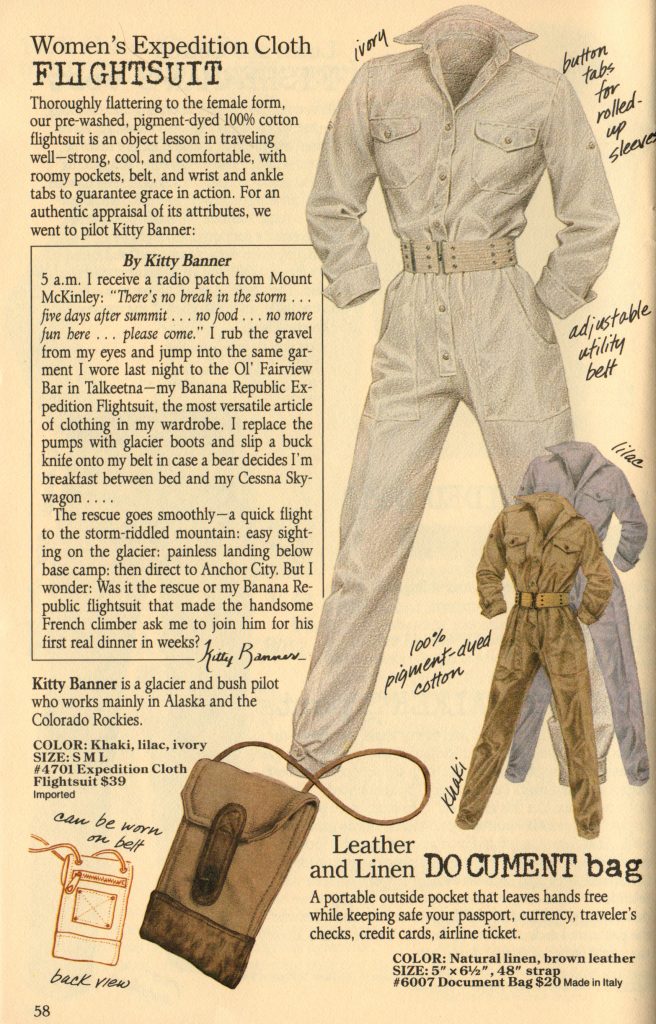 I imagine over the years Banana Republic carried some surplus military flightsuits, though there is only one appearance in a catalog, the 1982 Sale Flier. Flightsuits were a staple women’s garment for BR from 1984-1988. I think it’s interesting that they only made them for women, but I guess despite its origin as as a unisex military/utility garment, it only works as fashion on women? Boo!

There were FOUR iterations of this garment. The first (item #4707), sold in 1984, was listed as the “Lightweight Belted Jumpsuit”, which came in several colors (Khaki, Slate Blue, Black, White, Blue Chambray), bore the rare Diamond Tag. It is much different that the later flightsuits.

In Fall 1985 it was made in slightly heavier material and was called the “Expedition Cloth Flightsuit” (Item#4701) and had ankle and sleeve tabs. For Holiday 1986 it was renamed the “Expedition Flightsuit” (#4708), the tabs were removed and darts were added to the midsection to give it a more tailored look. Lastly, in Summer 1987 it was listed as item #4711 and only came in Wine color, then wine, khaki and teal in the Holiday 87 catalog, the final appearance of the flightsuit. #4711 does not have the darts in the midsection and shoulders and is practically indistinguishable in photos from #4701.

Expedition Flightsuits came in a number of colors: Khaki, Dark Khaki, Ivory, Lilac, Wine, Grey, and Teal. The hue of the color can vary depending on where it was made. The June 1987 newsletter article below mentions many problems in the supply chain including colors in the washed fabric coming out wrong because the water in Sri Lanka had a yellow tint to it. Blue becomes Lilac, for instance.

Interestingly, ALL versions came with a webbed “Utility Belt”, and regardless of suit color the belt is shown in the catalogs to be either Khaki or Olive Drab. These belts are almost NEVER seen on flightsuits sold on eBay and other places…they must have been tempting to use with other garments and thus easily separated from their original suits.

Many thanks to Kimberlee English Anderson for helping me figure some of this out!

To Make a Flightsuit

The June 1987 newsletter that details some of the many challenges faced in creating these flightsuits. It does not mention the original 1984 Jumpsuit, instead beginning with the 1985 version. Its a fascinating look at the trials and tribulations of the international garment production process. Each color shrinks differently, for instance, or fades in unacceptably even ways; the darts in the waist of the prototype were too shallow and that threw off the measurements; factories went bankrupt in the middle of production. The last flight suit redesign (no darts) in 1987 was delivered in only 3 colors, but only two were sold through the Holiday 1987 catalogue to ensure stores were well stocked (The Summer 1987 catalog only carried #4711 in Wine).

From the catalogue: “Thoroughly flattering to the female form, our pre-washed Expedition Flightsuit is an object lesson in traveling well–strong, comfortable, and efficient, with aerodynamic lines and tailoring details that guarantee grace in action: lightly padded shoulders, four room pockets, ankle tabs. And a price that could clean up in any airfare war.”

An easy way to tell if a flightsuit is a #4701 rather than a #4708 is it has ankle tabs and sleeve tabs, and lacks darts in the mid section. However, a khaki flightsuit with those details may be a #4711. There’s no way to tell without a price tag. They also came in Lilac, Grey, Black Olive and Ivory.

As stated earlier, this iteration of the flightsuit has a more tailored look, with darts in the shoulders and midsection. It came in Khaki, Blue, Black Olive, Ivory, Smoke Grey and Mulberry (Spring 86 update only).

#4711 was the final redesign of the flightsuit, and it first came in only Wine color, then Khaki and Teal in the Holiday 87 catalog (and Wine in stores only), the final appearance of the flightsuit. Without price tags on it, it will be difficult to tell a khaki or teal #4711 from a #4701. #4711 does not have the darts in the midsection and shoulders, just like the #4701. Wine or Teal colors were only offered with the #4711.