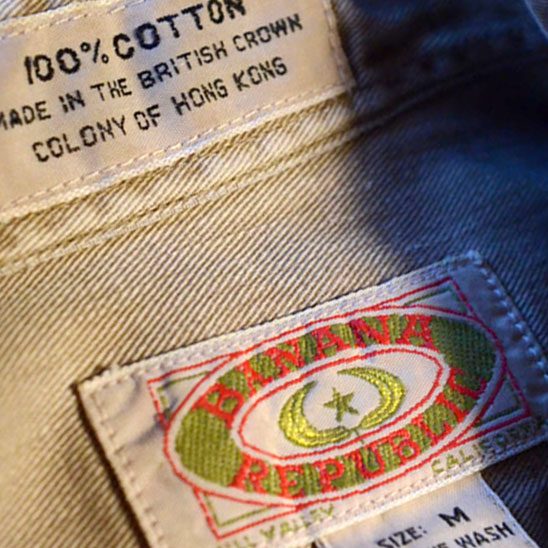 We are doing a bit of archaeology with this blog, trying to help figure out where certain things fit in the BR timeline, which is especially helpful when collecting BR. A great clue to the puzzle is the label or tag in the clothing itself. Here is the breakdown of BR labels as I understand them.

The Star and Bananas, AKA The Coat of Bananas AKA the Mill Valley tag is the label that was in use during the safari catalog era of Banana Republic. It was in use PRIOR to the 1983 GAP purchase–at least as early as 1982 if not earlier–and continued through the end of 1988 at least, possibly into 1989.

There are three major variations on this label: Early, Mid-Early, and Mid-Late.

This label is verified to be found on items created before and after the mid-1983 GAP purchase. Designed by Patricia Ziegler, it has a light, funky quality to the typography and the green of the coat of Bananas is a bright, pure green. The bananas fill the interior oval and have rounded points. Mill Valley is on the left side, California on the right, divided by the bottom of the oval. Note the wide amount of space between the words. It is the largest label, measuring 6cm wide.

This is guesswork on my part, but it seems that this tag comes between the Early Label and the Mid-Late Label, but there is some crossover. Also, I notice this one a lot on leather goods. It is slightly smaller (5cm across vs 6cm). It has the same bright green as the Early label but the text is a little tighter, the letters have more pronounced serifs (the blocks on the tops and bottom of strokes. The bananas have sharp points.

After the Early Large Label there are a variety of Mill Valley labels. The serif text is thicker and has less variety, the green has a yellowish tint and there is often a slight iridescent quality to it. In many cases the bananas are sharp and pointy and do not fill the oval. Sometimes these have a “squashed” quality to them. It averages a little over 5cm wide.

This label is rare. It has been found on early Bombay Shirts, Bombay Shirt Dresses, Jumpsuit and Ventilated T-shirts and comes from India (possibly the same factory?). I date it to 1983 because it uses the Primo Angeli typography that was designed when the GAP took over in mid-1983. 1985 is a guess based on a dated price tag on a Bombay Shirt.

These smaller labels measure 1 3/4″ x 1″ and are seen in may different shirts and other garments. They have Mill Valley and California vertically aligned along each side of the logo. There is some variation in them. They usually have pretty fat bananas, but some have sharp points, other rounded. The color can vary from bright green to yellow-green. The text can be either serif or sans-serif.

Inexpensive shirts like the Old English Wildlife Engraving T-Shirts or Diplomatic T-Shirts have a printed Coat of Bananas label that says Made in the USA.

The printed Stacked Logo label appears on the Banana Republic Shirt among other items.

This label is found in some Gurkha Shorts, possibly from the late 1988-89 timeframe (the 1989 catalogue says made in Zimbabwe).

The Coat of Bananas did appear on some clothes that we know were made after 1988, the end of the Ziegler Safari Era. See Transitional Pieces for more.

After the departure of the Zieglers and the end of the safari catalogs Banana Republic Travel & Safari Co. remained the name of the company.

The first label in the new regime is the Safari & Travel Label, which inverts the official name of Travel & Safari. This dates to 1989.

Judging by the price tag with the old logo on it, the “Banana Republic Civilian Reserve” line was made sometime around 1989-90.

The rest of this guide is by no means exhaustive or complete. I’m not able or interested in documenting the twists and turns of the BR brand after the Zieglers left, but I present a few of these with my best guess about timing.

The One Harrison Label

These next two tags I am uncertain about. The “One Harrison” label likely came first. It retains the Travel and Safari subheading. BR had moved its offices to One Harrison Street in San Francisco in the late 80’s. It’s doubtful that anything ordered from the catalog in, say, 1988-89, would have had this label in it.

From the same era, sans globe:

After that, BR tags seem to be purely text based. I’m sure there’s plenty of variation that obviously we won’t bother to document. You may run across BR clothing that looks similar to the classic stuff, but it’s from their “Heritage” collection and you’ll know it by its label.

Above is printed tag in a reproduction Old English shirt made by modern BR. Date uncertain, circa 2015?