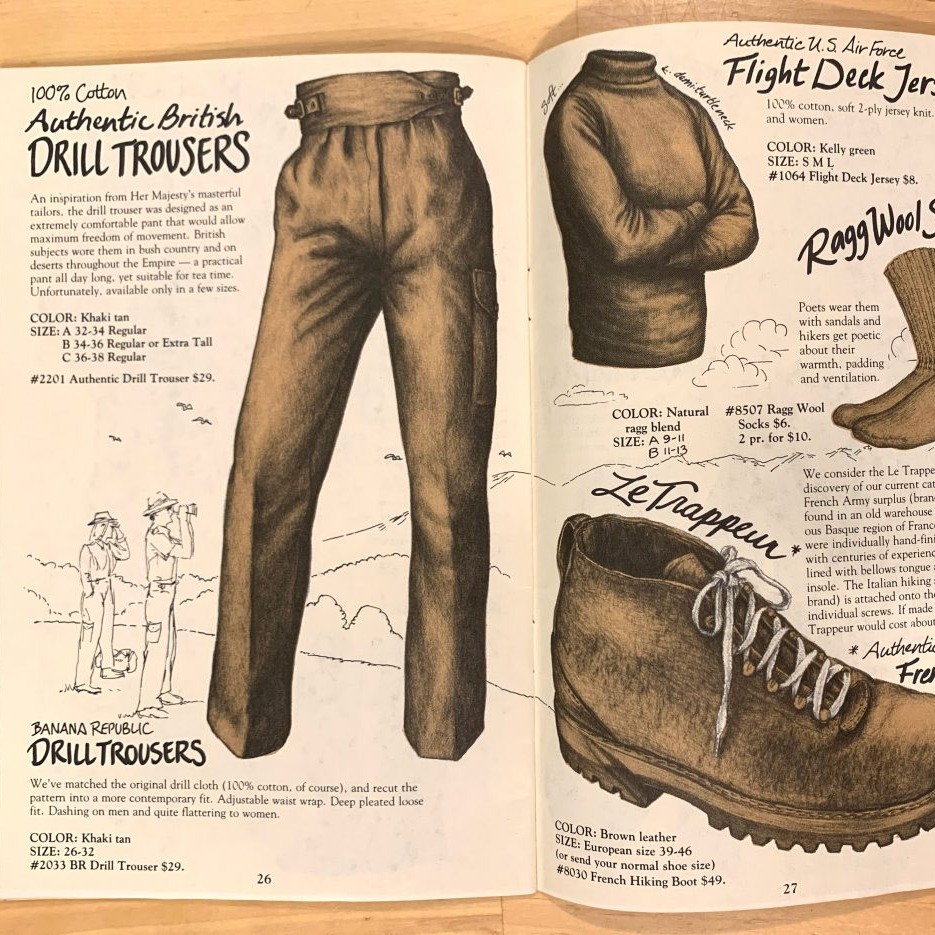 An up close look at the Banana Republic Drill Trousers included in the Ziegler’s gift to Abandoned Republic. As mentioned in the previous post, there were two versions available in the same catalogue in 1983, authentic surplus or newly manufactured, which I believe these to be. The early Mill Valley large tag places it squarely in 1983. Interestingly, the cargo pocket doesn’t have a button, and all of the catalog illustrations show a button on that pocket.

British Drill Trousers (AKA Safari Trousers) were limited surplus items from 1980 until Fall 1983 when they were mass-produced by BR, and were available through 1985. They have the same waist as the Safari Shorts/Gurkha Shorts.

From the 1980 Catalogue No. 4: “These spectacular British safari trousers, an inspired creation of Her Majesty’s tailors, were made for colonial wear in the early 1950s. As the Empire crumbled, the pants piled up (never worn) in a London warehouse, which is where we found them. This is not only an authentic collector’s item, it’s the best pair of trousers you’l find at any price. We live in them. The only remaining sizes will for men from 32-inch to 37-inch waists. All others: sorry, you’re too late.”

The 1983 Catalogue had two kinds on one page: Authentic British Drill Trousers (surplus) and Banana Republic Drill Trousers, re-made by BR. “We’ve matched the original drill cloth and recut the pattern into a more contemporary fit. Dashing on men and quite flattering to women.”

From the 1985 Catalogue: “An inspiration form the British Empire’s masterful tailors, these drill trousers were designed as an extremely comfortable pair of pants that would allow maximum freedom of movement. We’ve matched the original drill cloth (100% cotton, of course) and recut the pattern into a more contemporary fit. Dashing on men and quite flattering to women.”