This is the first of Mel and Patricia Ziegler’s many travelogues, the African Journal. The cover is her portrait of the two of them in full regalia at work in the African bush. As the cab driver in London hilariously asks, “Mr. and Mrs. Livingstone, I presume?” 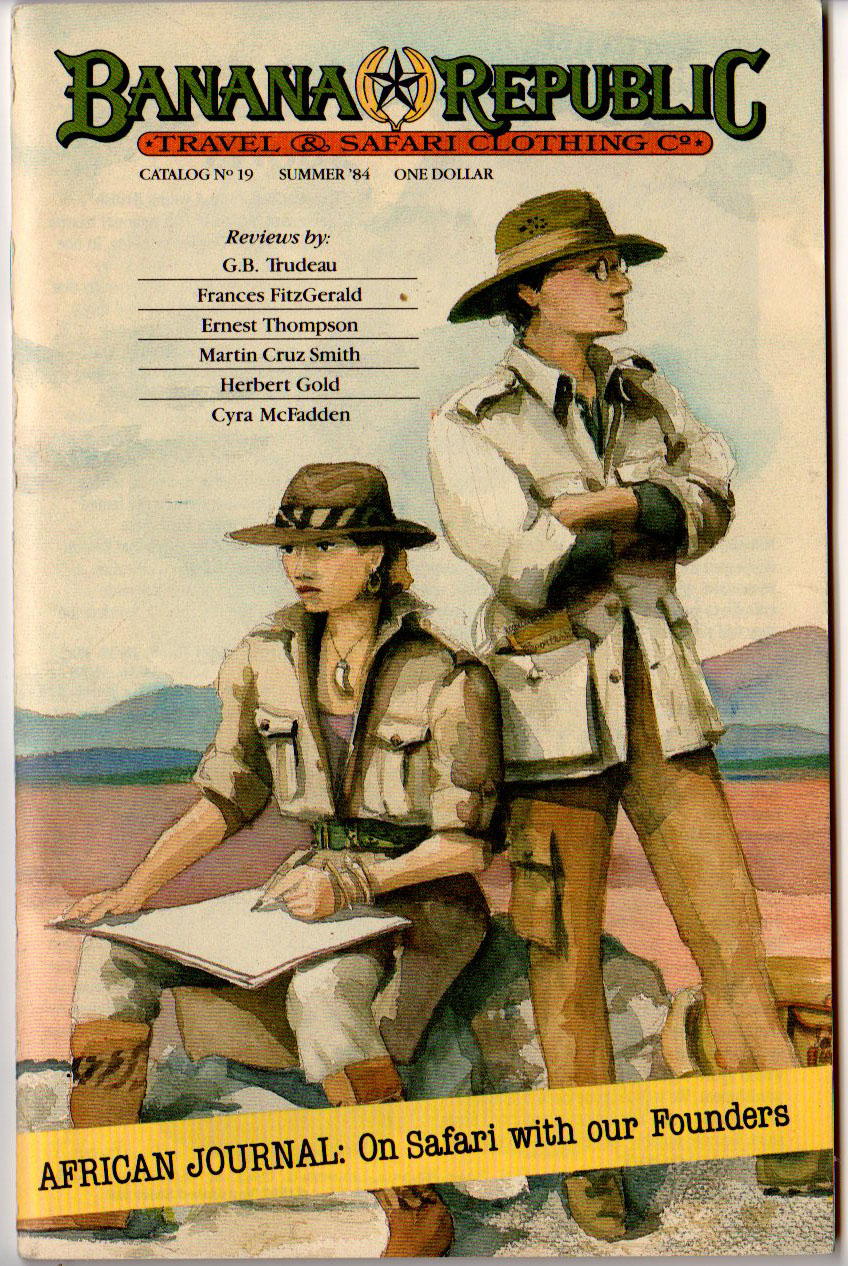 This 1984 catalog retains a lot of the look from the older monotone catalogs, the clothing is rendered in black and white pencil and then hand tinted. Watercolor illustrations from the staff and Patricia adorn the pages. BR is still a funky operation, but growing fast. 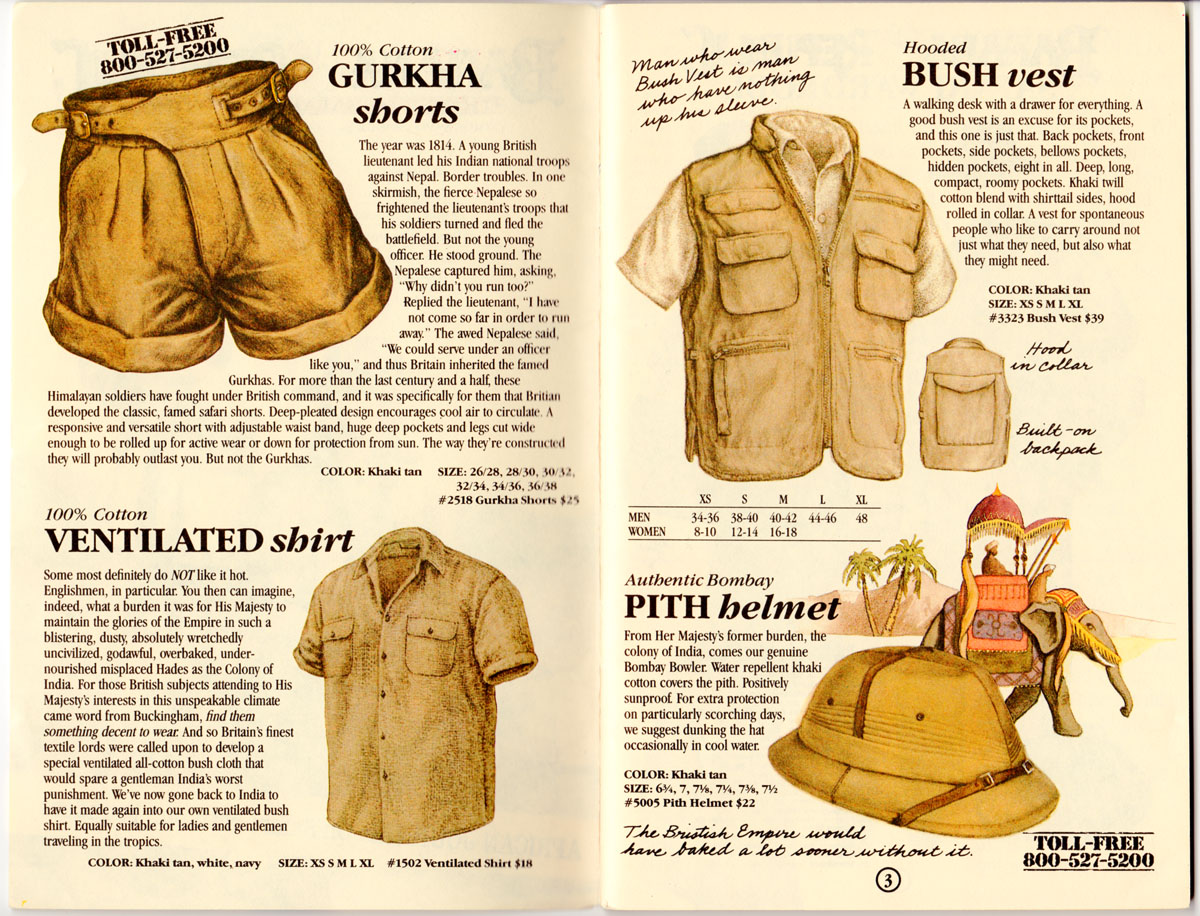 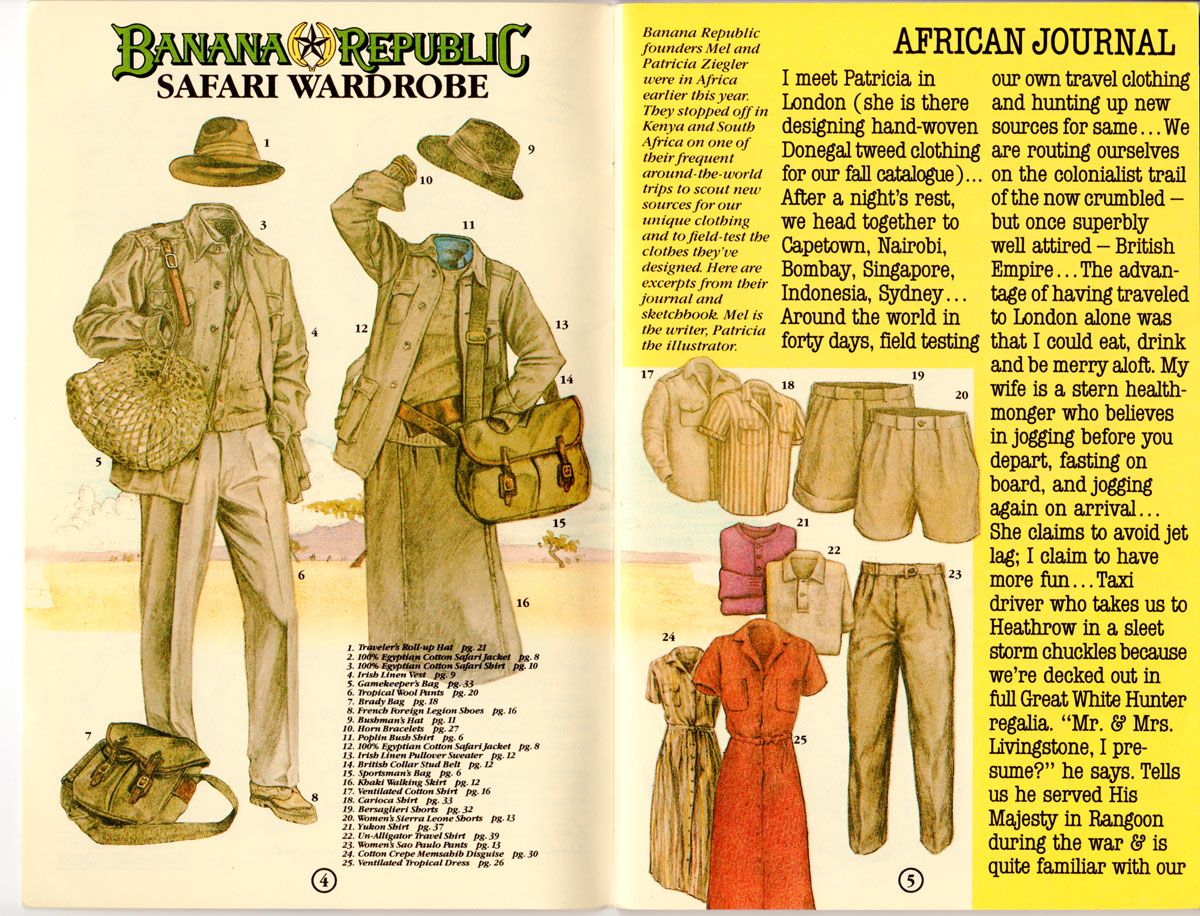 The wardrobe illustrations are very nice as usual. These are real-life safari clothes you can wear to the African savannah or to a weekend in the country.  The start of the Travel Journal paints a fitting portrait of the globe-trotting entrepreneurial couple.  I enjoyed hearing about Mel getting liquored up on the flight over as he was free from his “health-nut” wife. 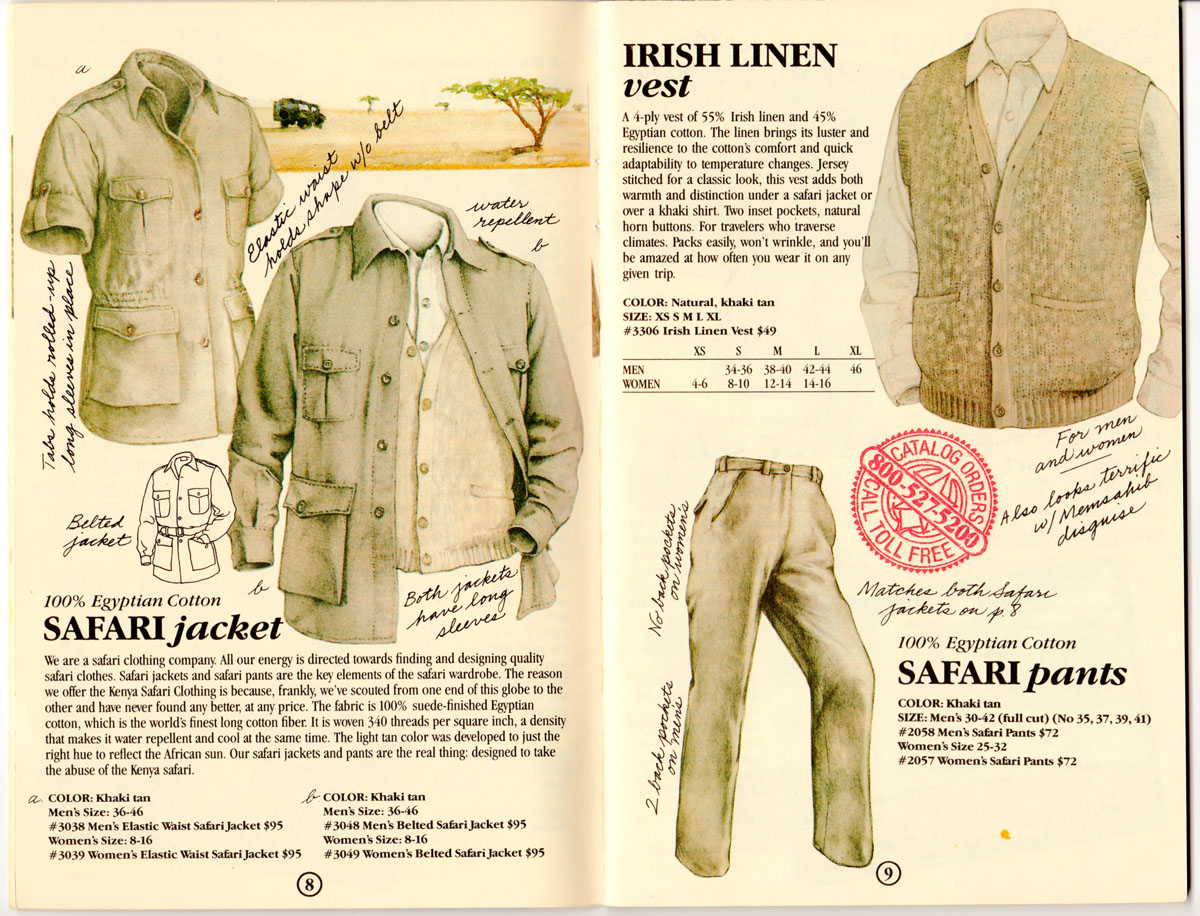 “We are a safari clothing company. All our energy is directed towards finding and designing quality safari clothes.” (That MIGHT change, but we’ll keep insisting…) Cool watercolor sketch with the Land Rover in the background. 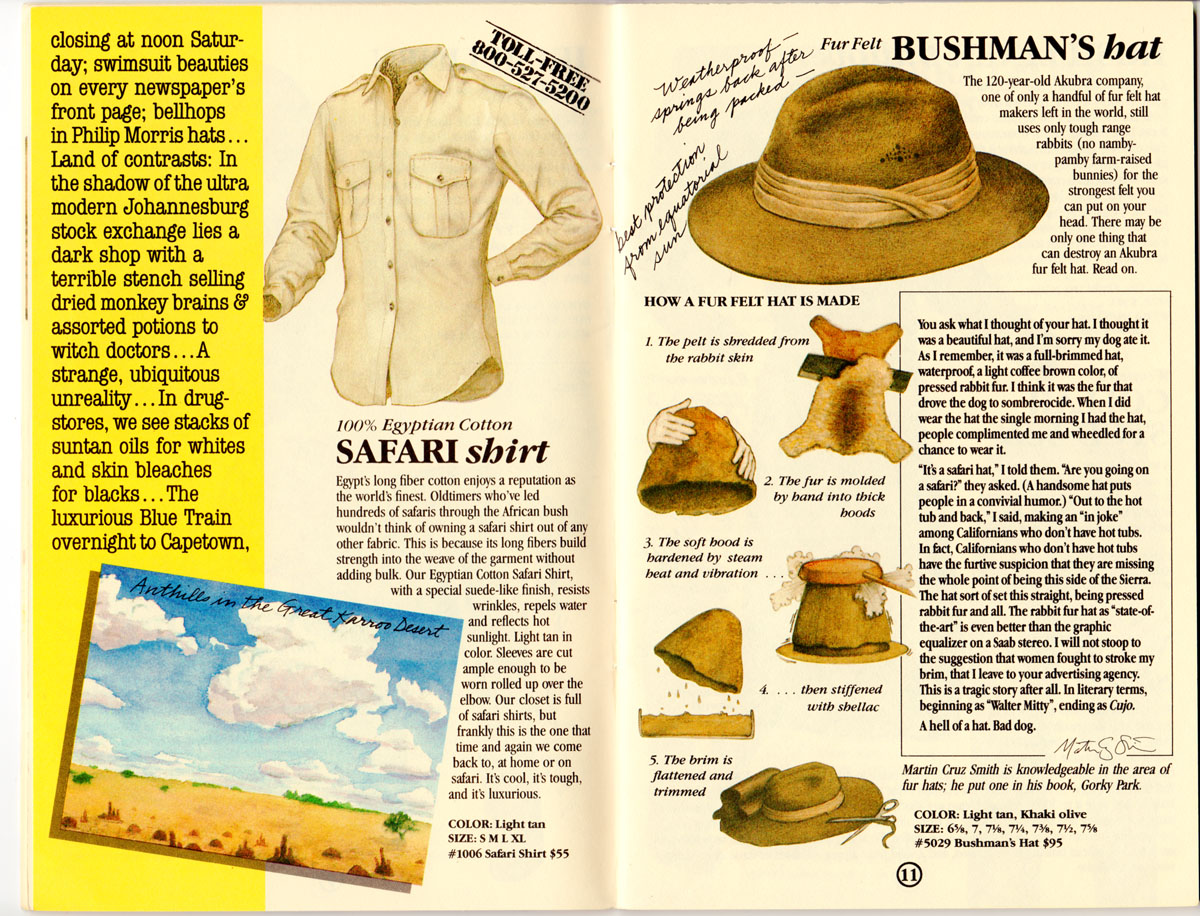 I also like this watercolor for Patricia of the anthills in the Great Karroo Desert. Nice clouds! On the opposite page we are once again treated to the grim and fascinating process of making a proper fur-felt safari hat! There’s more that one way to skin a rabbit, but only one way to make a Banana Republic Bushman’s hat…. 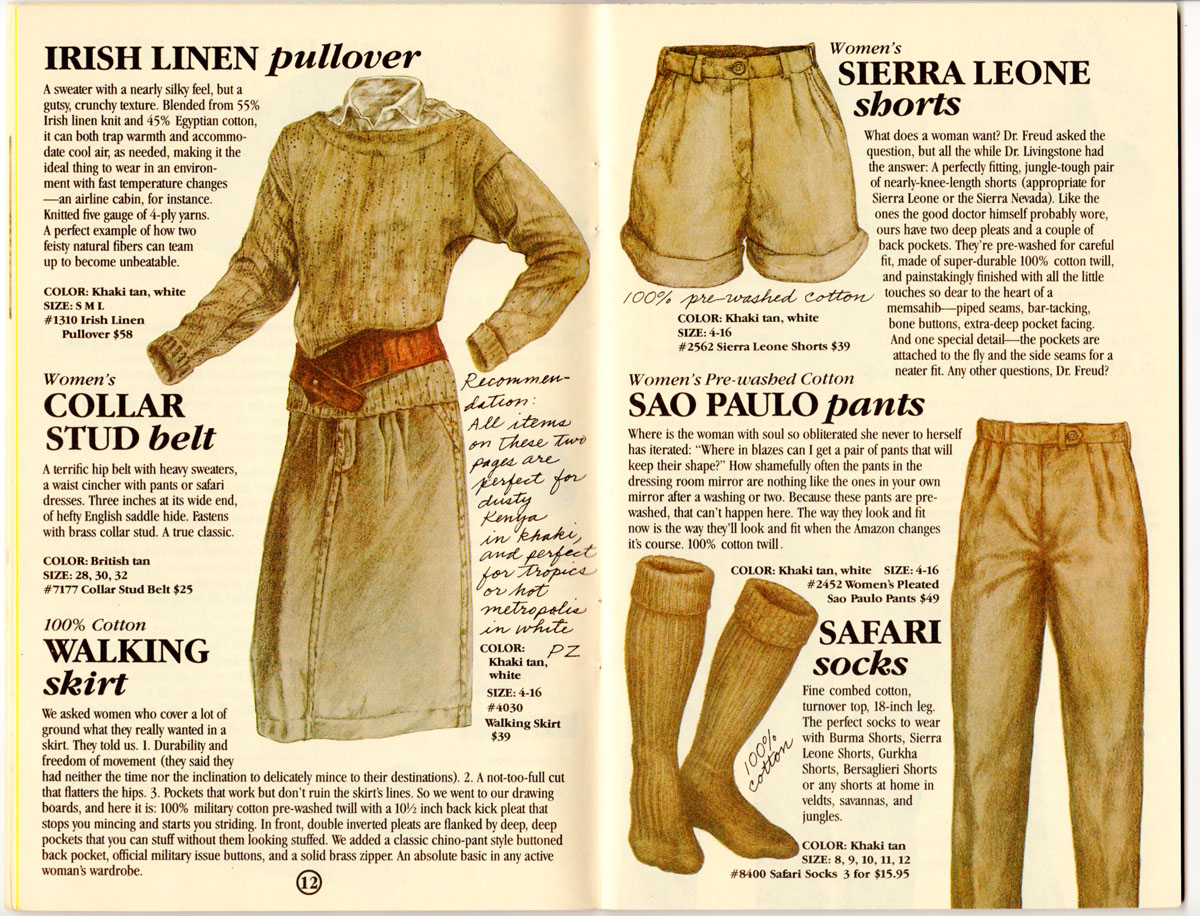 As with most early catalogs, the clothing leans more toward men than women and the two are more similar in style. Almost everything is in the earth toned safari style, while later catalogs would get a little more fashion-forward for women’s cloths. That belt is a classic, you see it a lot on eBay. 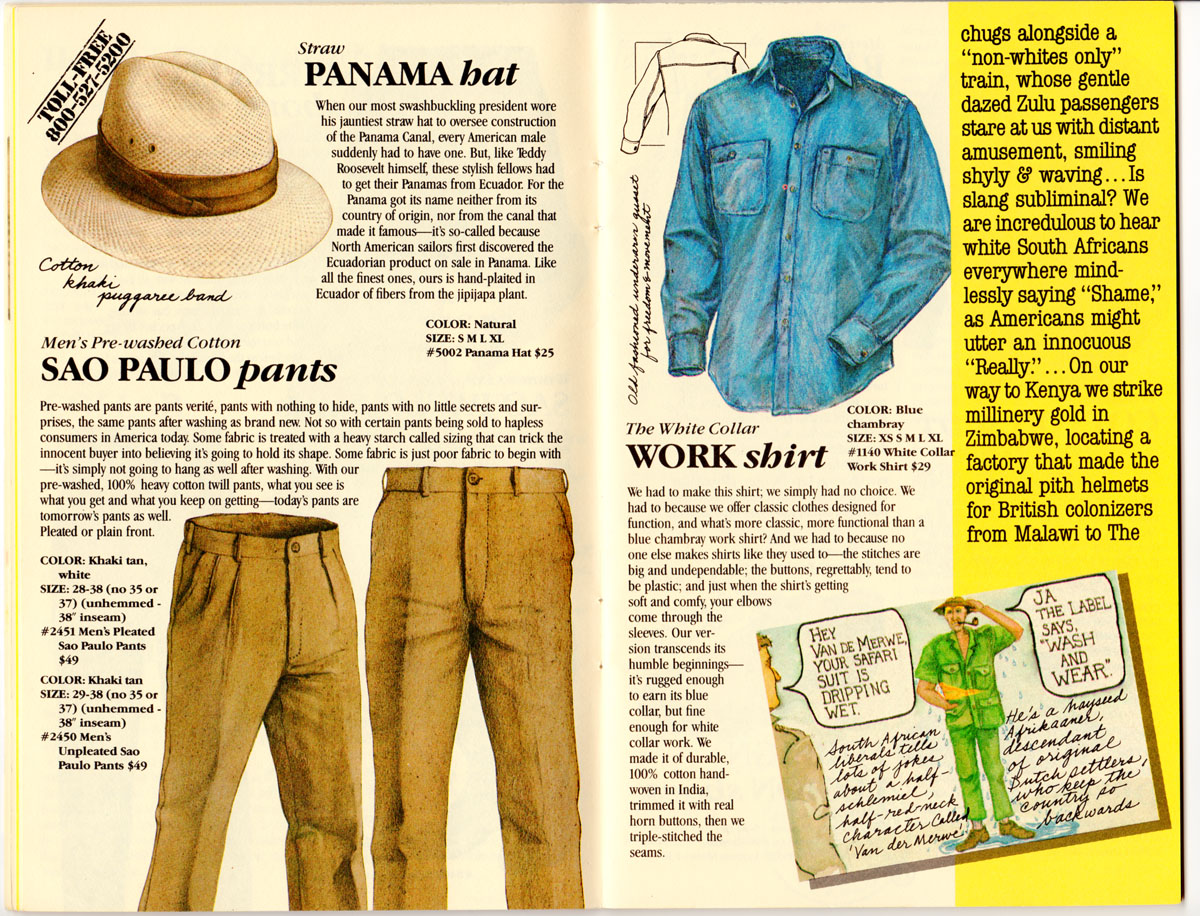 A brief stopover in 1980s Apartheid South Africa is succinctly described in a poetic way that gets across the disturbing absurdities the travelers encounter. Then it’s on to Kenya, but first–Hey! Pith Helmets in Zimbabwe! Yay! 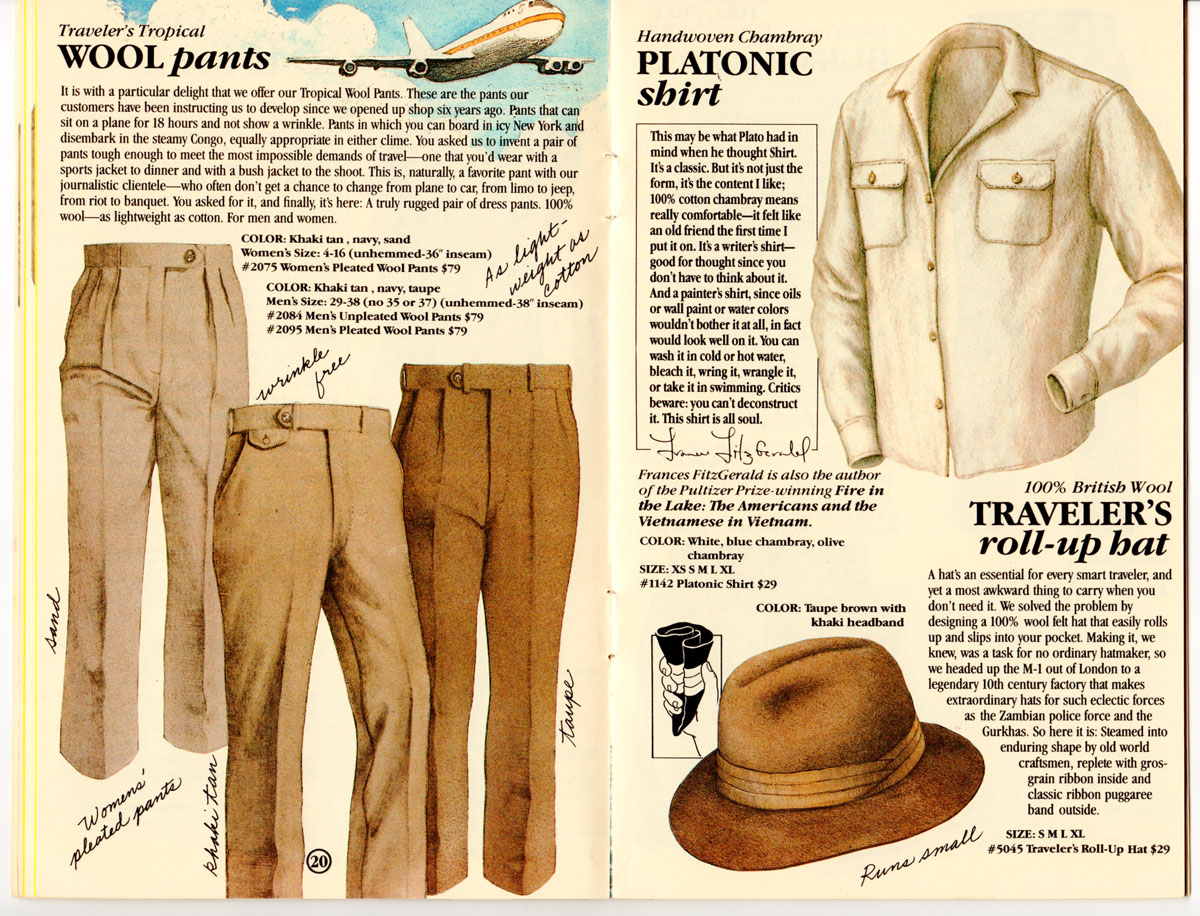 This page really sells you on the idea of yourself as a savvy and tireless world traveler. I confess I’m skeptical of wool pants that never wrinkle and feel comfortable in London or the Congo, but sign me up. Knowing I can take a meeting and then go shoot some bloody big beast without having to change trousers is a winner for me. The Roll-Up hat is my favorite BR hat, it’s just perfect. I don’t have the nerve to roll it up as advertised, I’m afraid it wouldn’t snap back into shape. I guess I need more faith in the Ziegler’s wares! 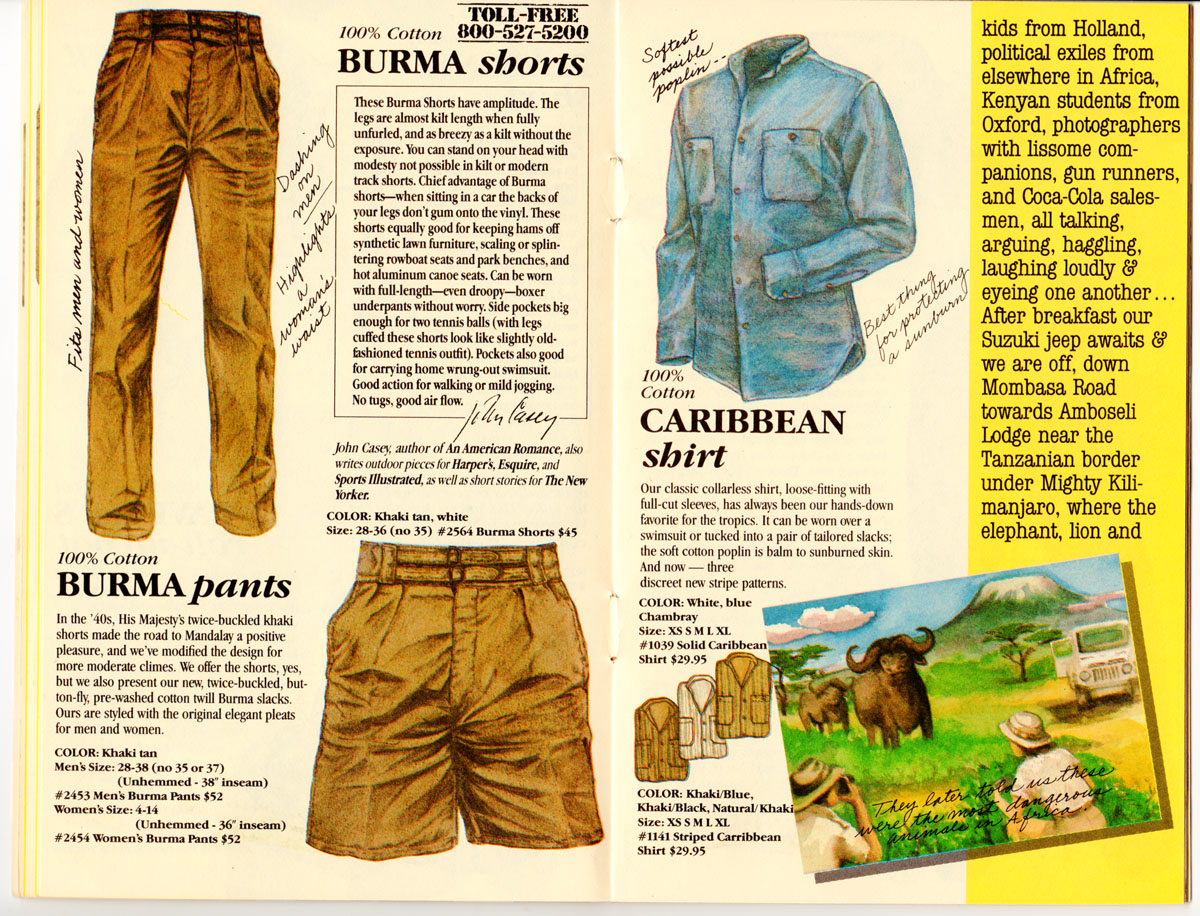 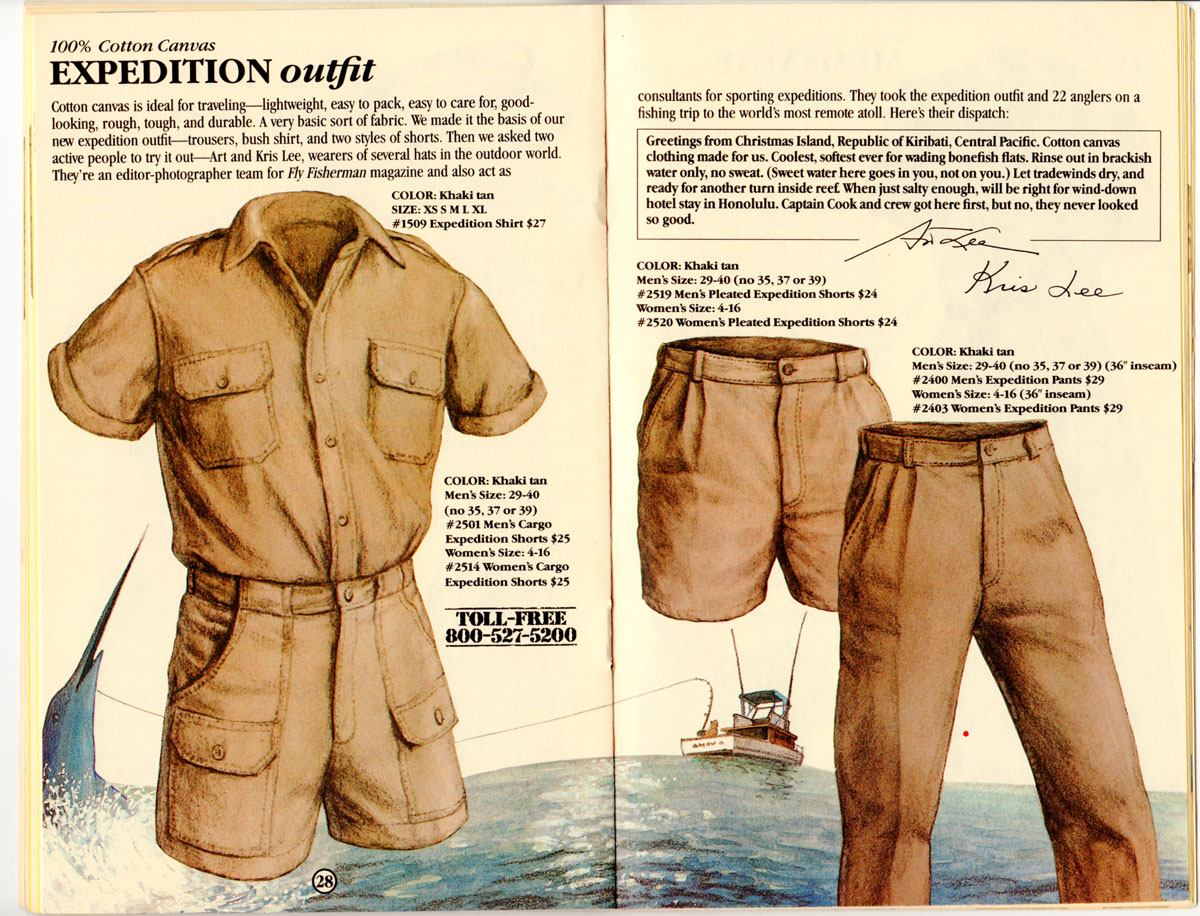 This is a pretty unusual 2 page spread advertising the Expedition outfit in it’s various configurations.  Don’t know if I’ve seen a lot of ocean or fishing themes in BR catalogs, the boat at the crest of a sea swell is very cool. Very Hemingway, I suppose. 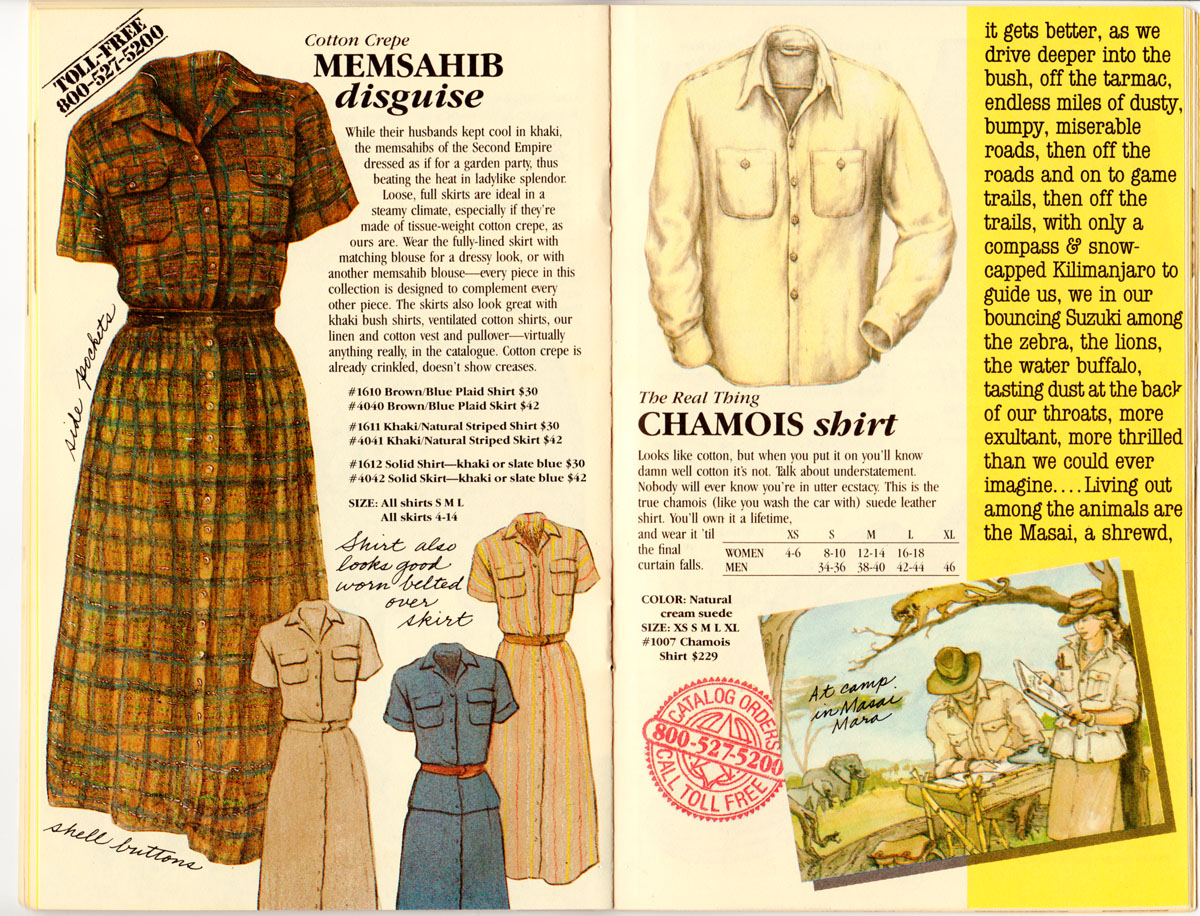 The African journal continues, now deep into safari country. I always marvel they actually took a typewriter and desk with them on these journeys. Before the age of laptops, I guess. Another part of this colonial African fantasy is the Memsahib Disguise (not dress…disguise). Looks great with anything in the catalog! Love it… 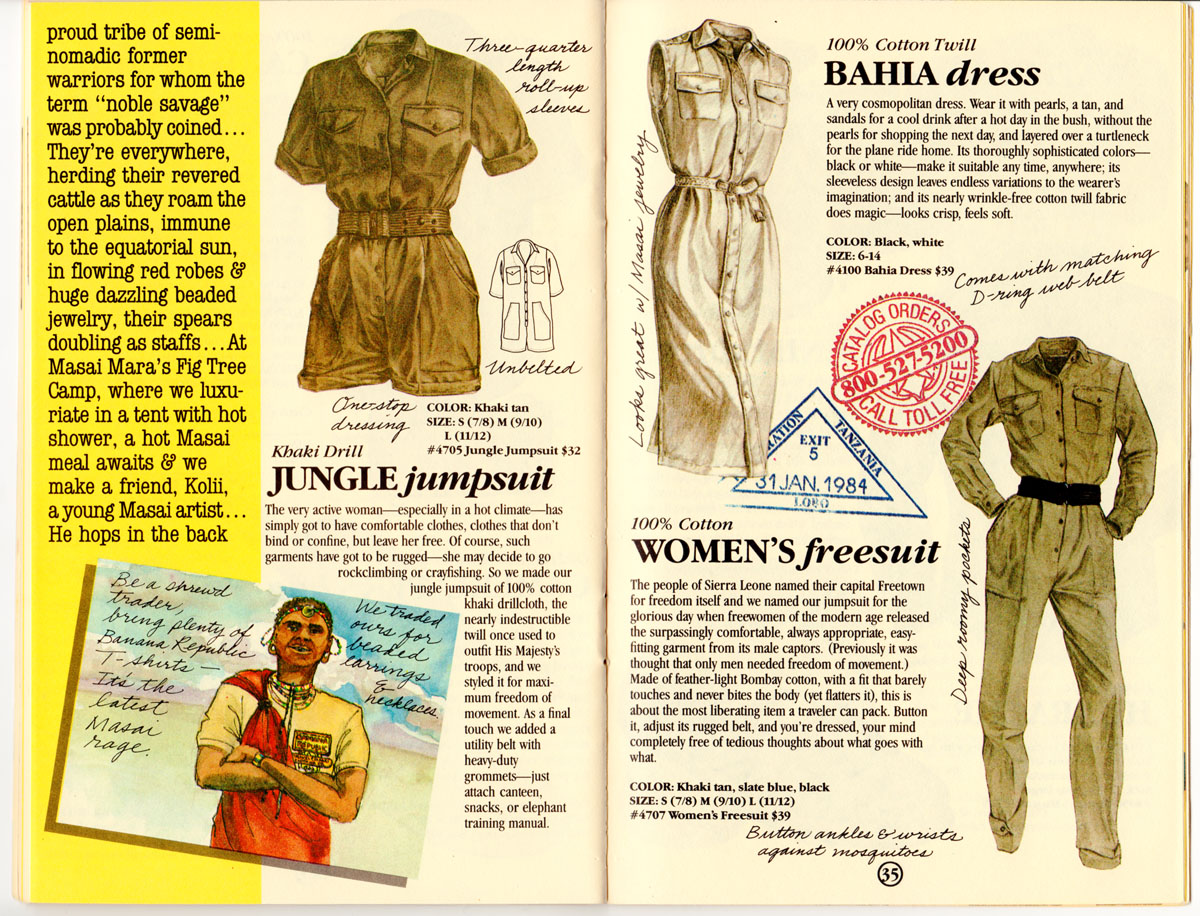 Always a fan of the BR khaki jumpsuit (Why only for ladies, though?).  I like to think BR secretly wardrobed the Dharma Initiative…The painting of red robed Masai warrior in his BR t-shirt is awesome, I’d kill to see a real photograph of that… 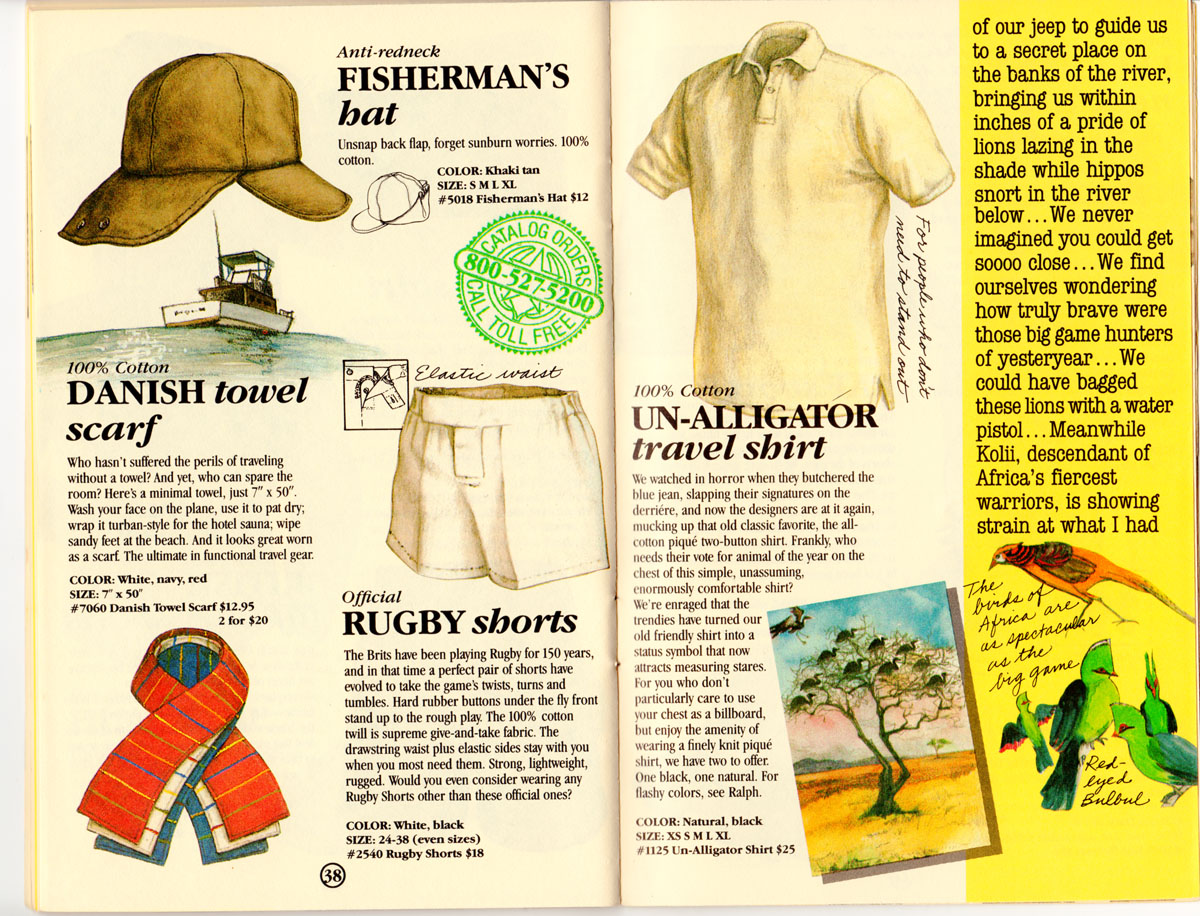 Along with some lovely sketches of African birds from Patricia this page brings us several unique pieces. The Anti-Redneck Fisherman’s hat wasn’t offered for too long, and this is the first I’ve seen of the Towel Scarf, which is kind of a brilliant (or silly) idea for a traveling item. The Un-Alligator would later become the No-Polo when Ralph Lauren’s famous shirt overtook the Alligator shirt among the prep-set. 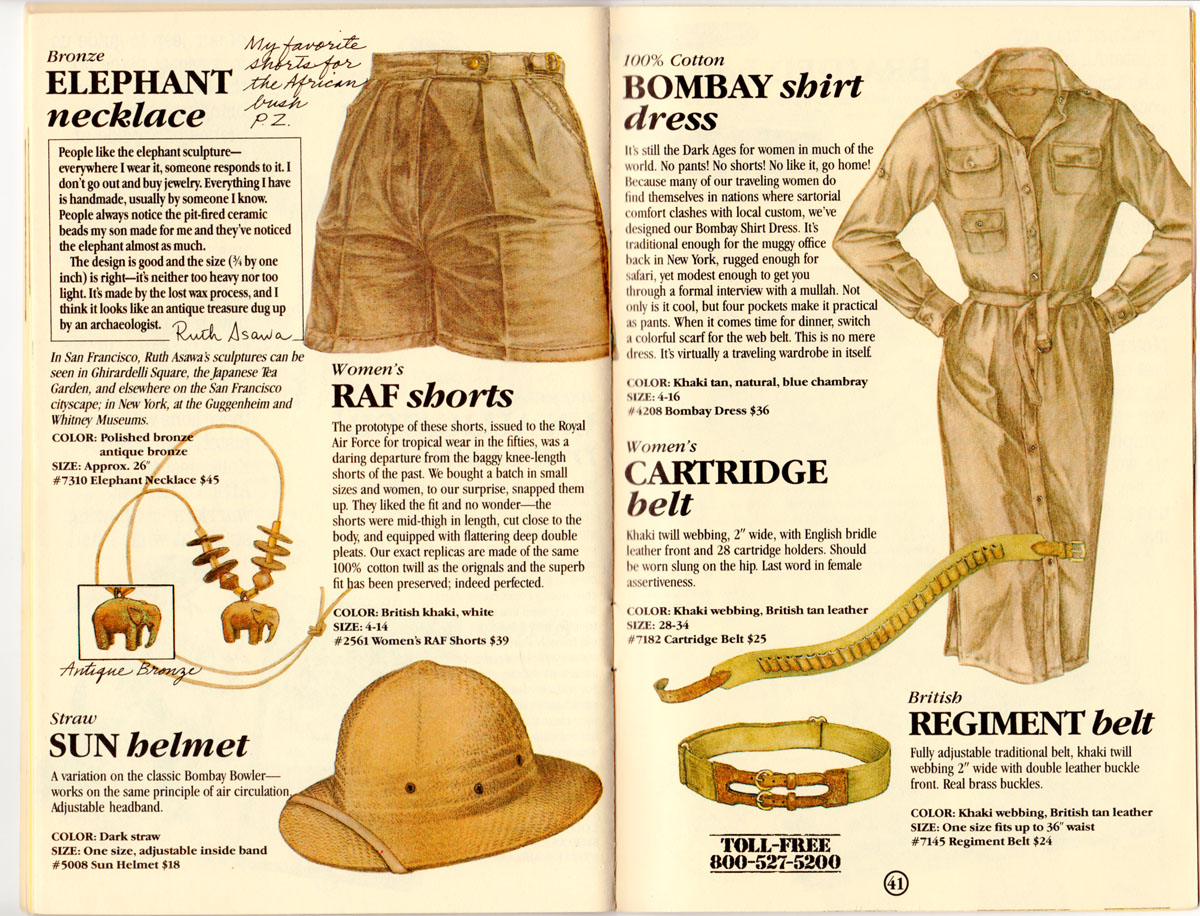 Okay, some seriously cool stuff here. C’mon, that cartidge belt is completely bad-ass, and that Regiment Belt is no slouch either. Sexy surplus! 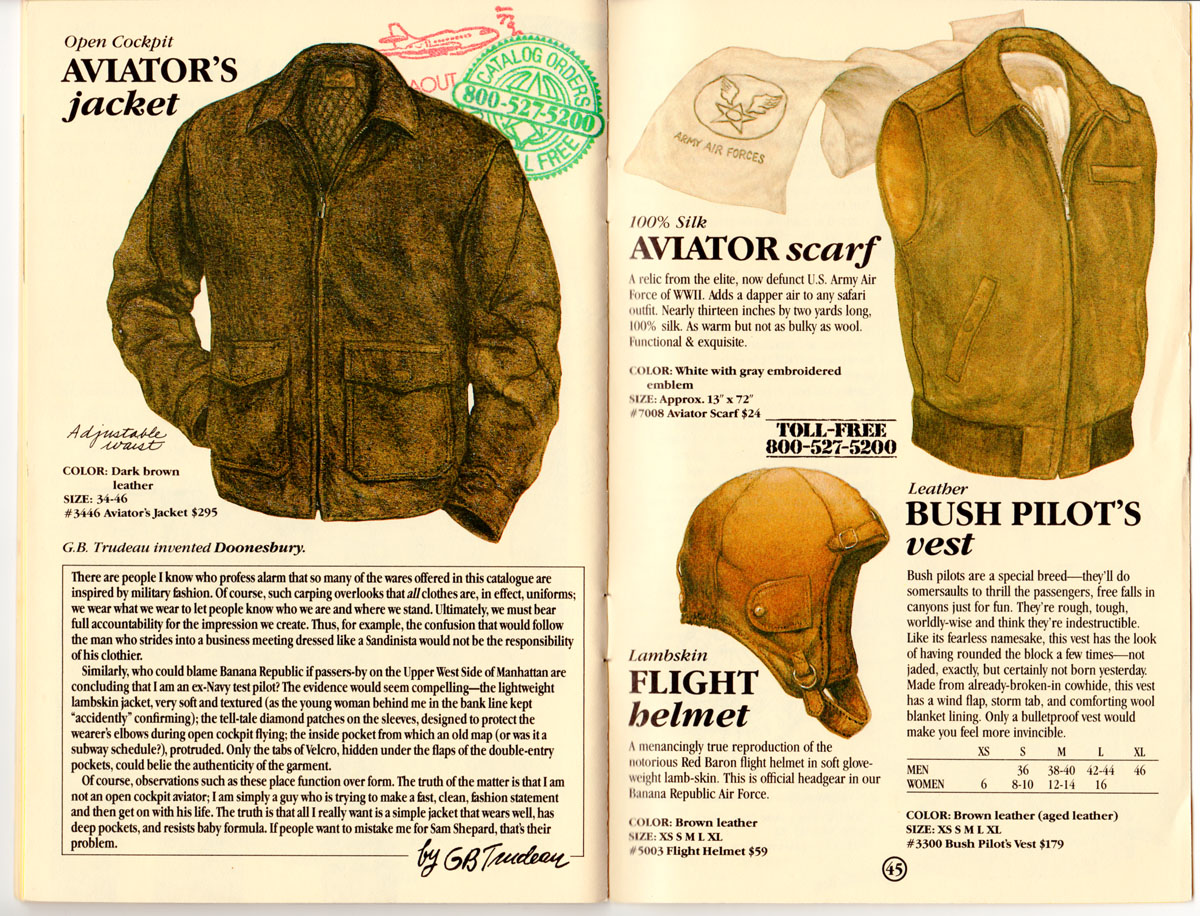 Here’s the aviation department. Biplanes were huge in the 1980’s. Almost every family had one parked in the garage, I personally had my pilot’s license before I could drive. The Open Cockpit Aviator’s jacket dates back to the early days of BR and would soon be replaced by the more familiar Army Air Corps Jacket and the Goatskin Flight Jacket. 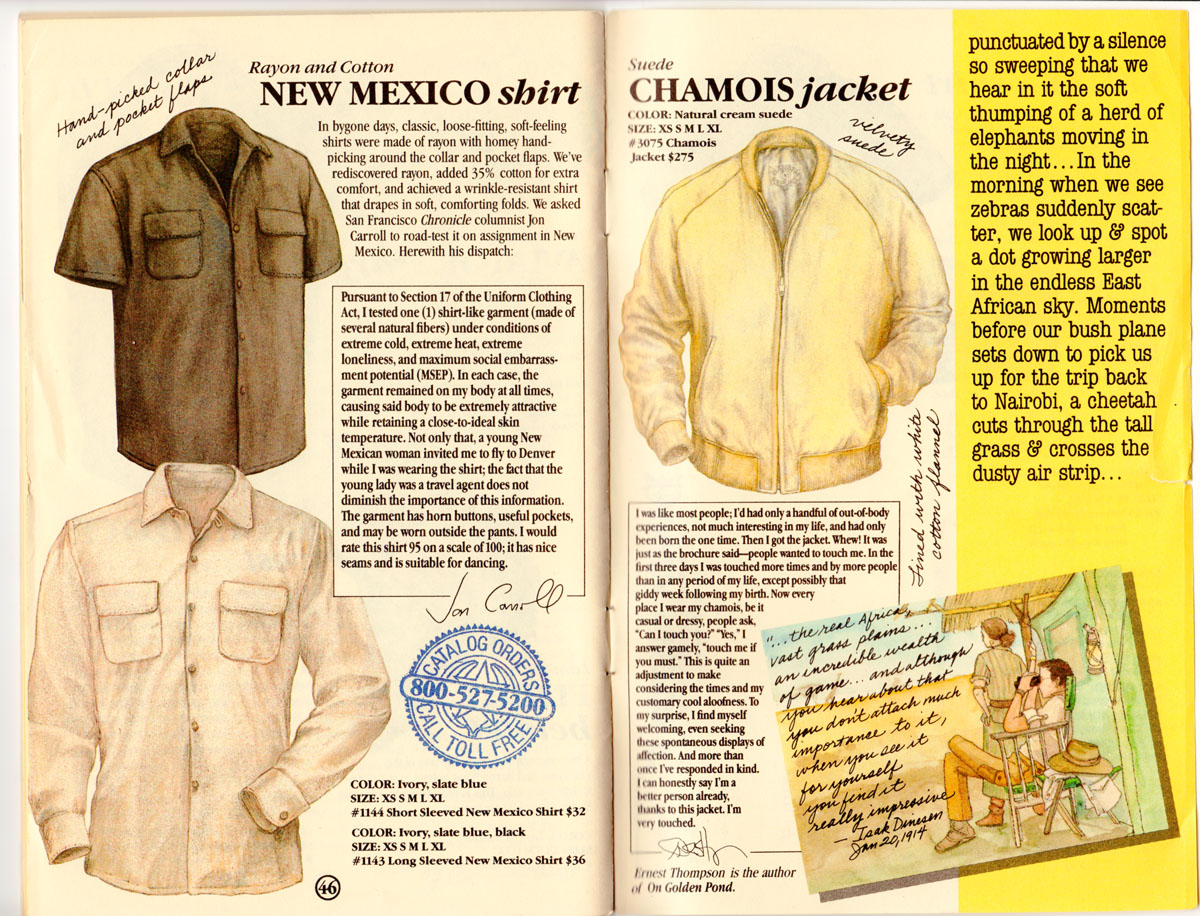 …and as the morning breaks and the bush plane arrive to pick us up for our return to civilization we ponder we share a laugh over Jon Carroll’s hilarious testimonial for the New Mexico shirt. I’m not sure what makes it a New Mexico shirt precisely, but it’s my home state and Carroll is my favorite columnist so I feel at home…. That’s it for Summer 1984…Have a nice 4th of July holiday, we’ll start Summer 1985 the week after!