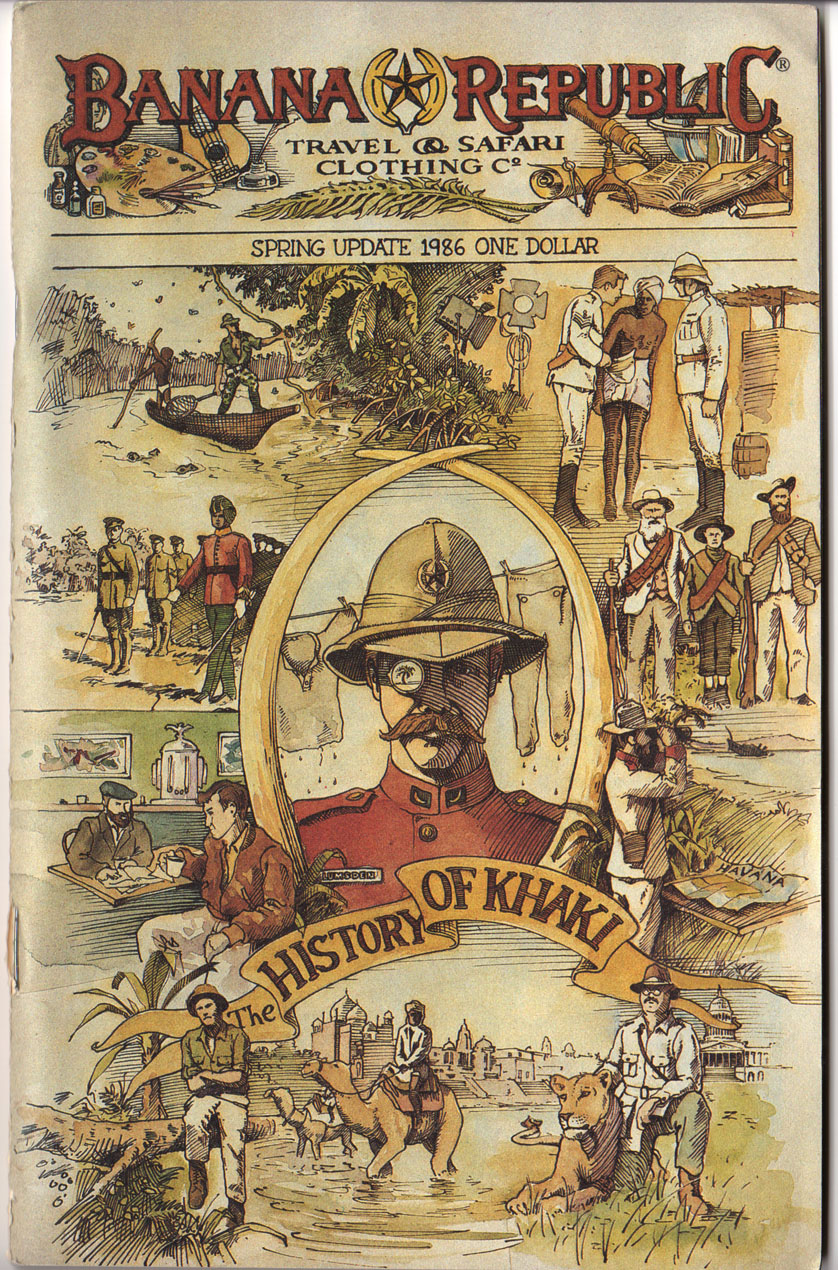 Banana Republic began issuing catalog updates in 1985. Each season had at least one, sometimes two. They are un-numbered. So Spring 1986 was #27, then it’s update was issued, then #28 Summer. The point of the update was to nudge the customer to make a purchase if they hadn’t already, to take a second look at what BR was offering that season.

The updates featured the exact same items as in the main, but occasionally they did include or remove some pieces for the update. The page layout was generally identical to the first catalog, but some pages were shifted to help spur sales of certain items. More expensive items were usually near the front and back pages that got more attention, while inexpensive staples like the Olde English or Propoganda t-shirts were in the middle.

A new cover , theme and editorial content were created to give everything a fresh look, so it was hardly a cheap and easy re-run. The clothes were the same but there was at least a half hour of new reading to do. Since the travel journal content was delivered in the sidebars of pages all they had to do was swap out the material and the layout of the clothing remained in place. They did change the little graphic icons, the Soviet pages has all kind of eavesdropping KGB guys.

Spring Update 1986 went with the theme The History of Khaki, and it’s an informative and whimsical overview of Banana Republic’s essential bedrock element. The cover is uncredited, but I can’t imagine it’s not Rob Stein, the very talented staff artist. Seeing actual human figures with heads is actually a bit unusual for BR, isn’t it? It has a lot of cartooning in the write-ups and it does a great job of entertaining you while it indoctrinates you as a Banananista. You see, when you wear khakis you aren’t participating in fashion trend, you are part of an unbroken lineage that dates back to the height of the British Empire. These clothes civilized the known world, dammit!

Page 22 has moved to page 3. The Goatskin Flight Jacket, a high ticket item gets more prominent placement. In the Spring catalog this was a double page spread about the Soviet Union trip, but now one page will suffice for the Khaki introduction. 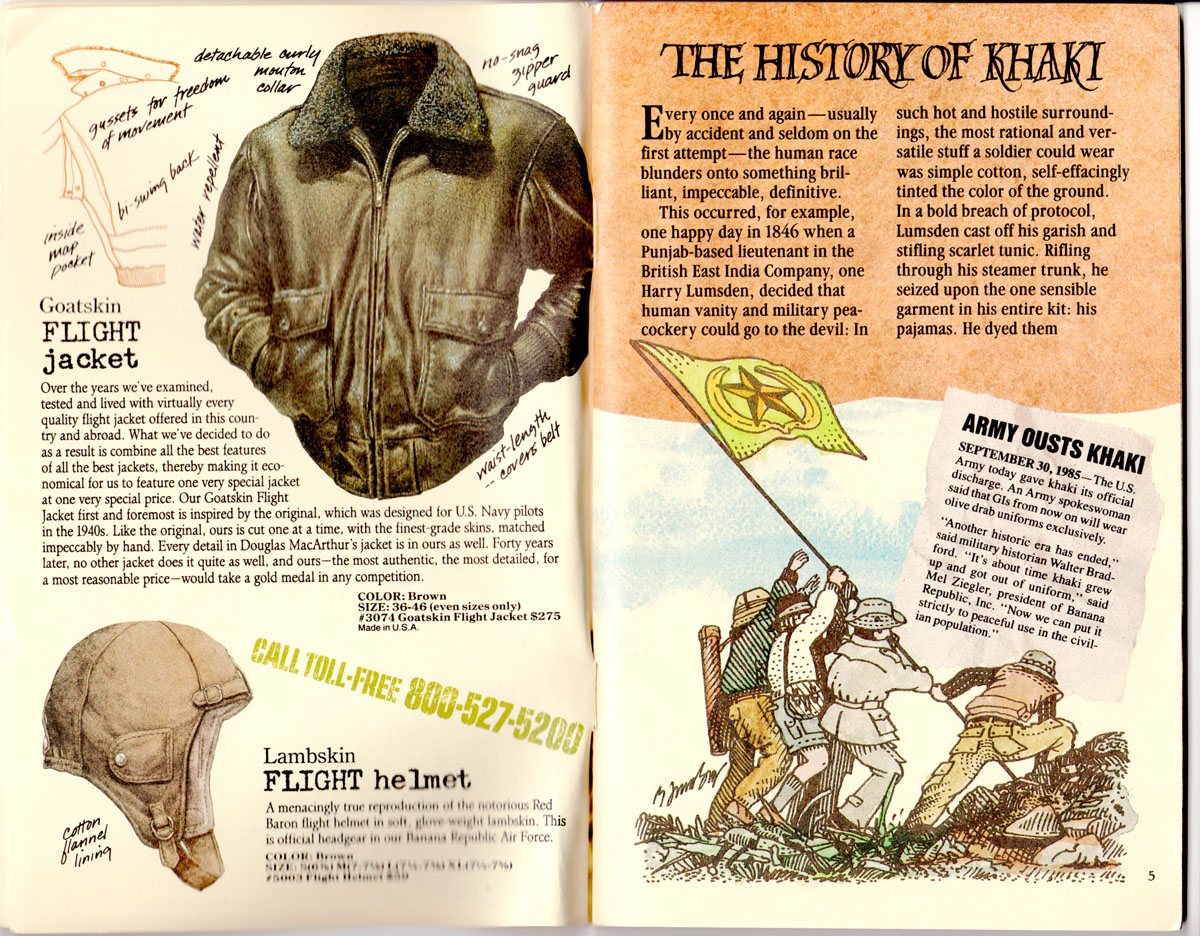 The extra page from the spread is not used for new clothing, but instead becomes an ad for the Bookstore business. Page 23 has moved to 22 and the only new item in the catalog is added: The British Officer’s Soapdish, a fantastic item of surplus for a travel catalog, has replaced the French Undershirt of the Spring catalog. The D-Day Duffel bag is stamped SOLD OUT, a not-so gentle reminder that this stuff won’t always be here, so get on the phone now! But fear not, I think you can still get this surplus soapdish from surplus dealers today. They must have made 50 million of them. 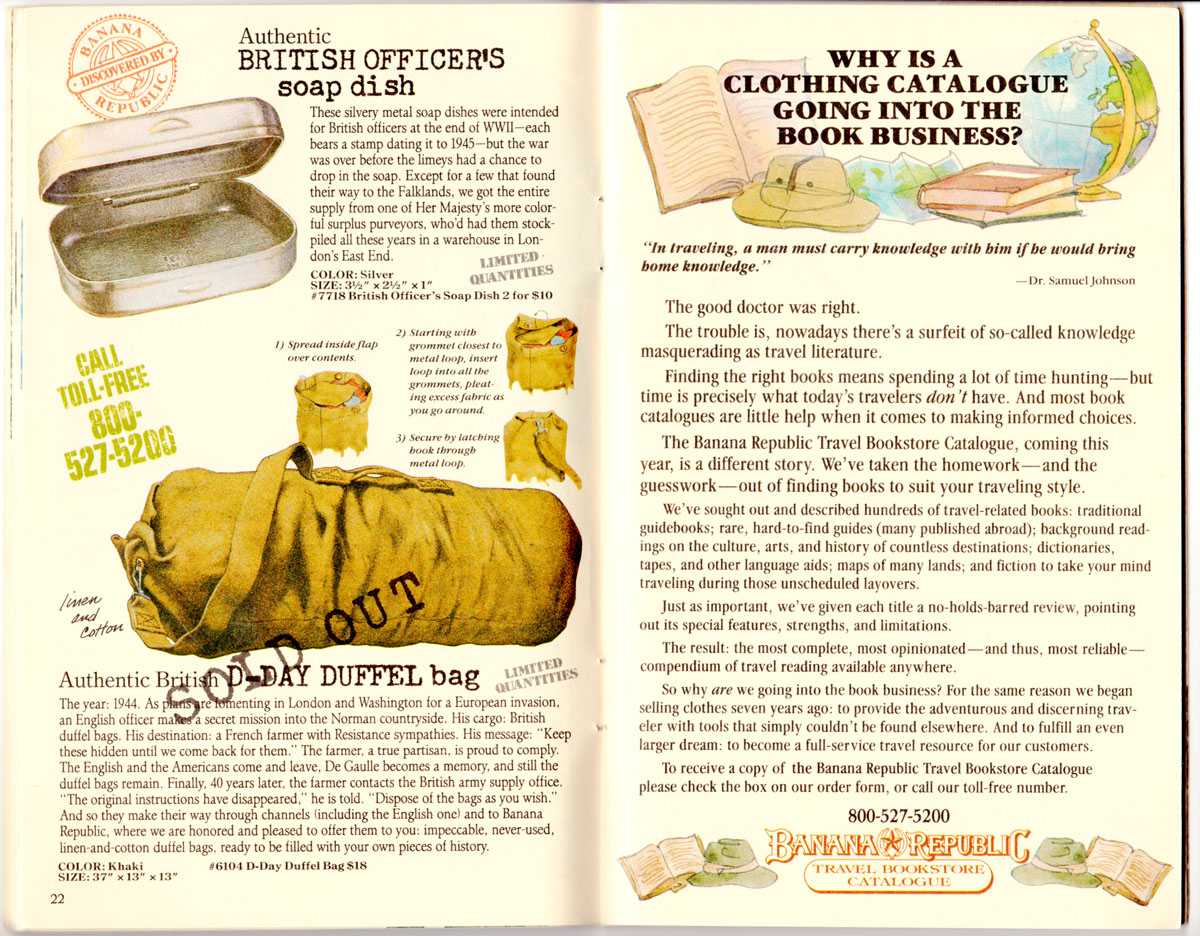 For comparison’s sake here’s 22-23 from the Spring Catalog…you know…someone once described this blog as a tad obsessive. Nah. This information will be really useful to someone, some day. Please let me know if that happens. 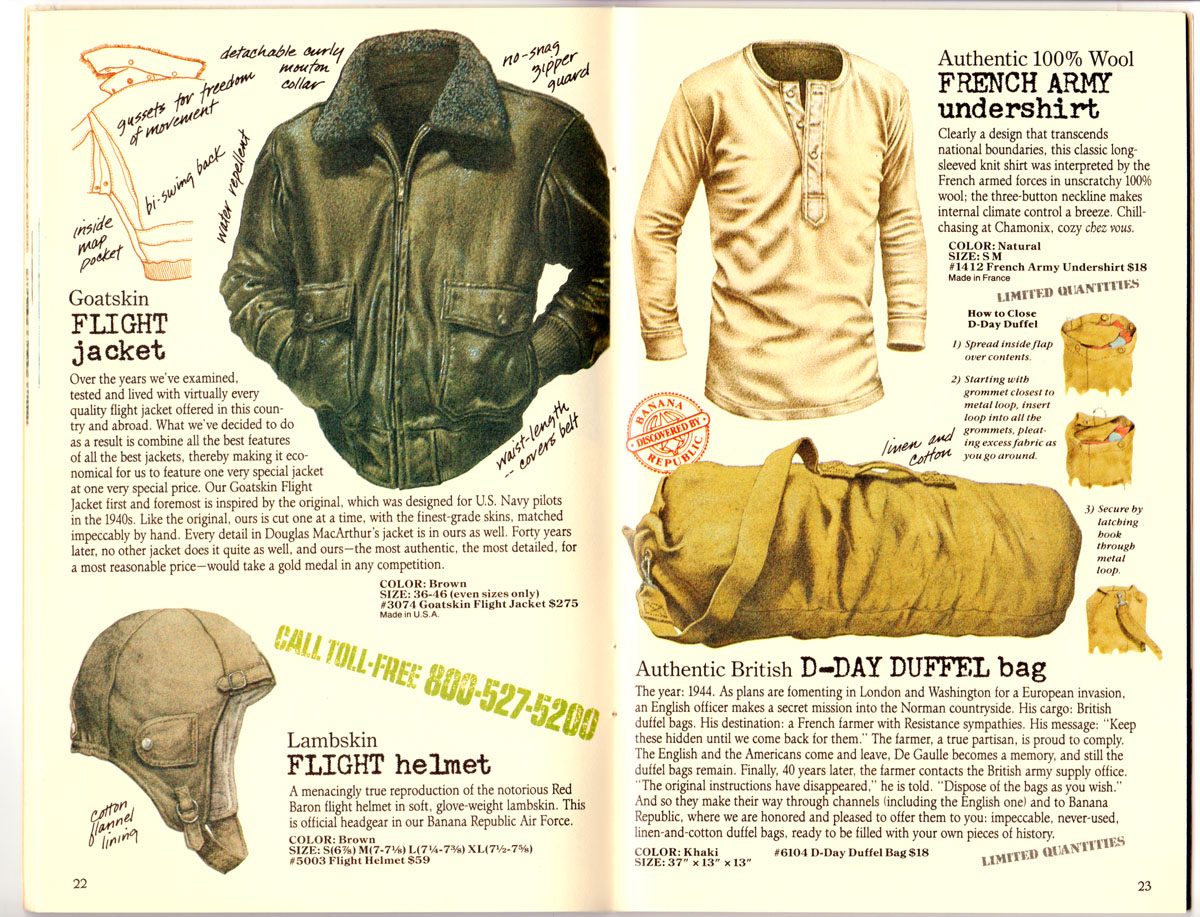 The only other changes I can find are that pages 2-3 and 46-47 have switched places and the Men’s Leather Hiking boot is sold out. Maybe the British Correspondent’s Bag ($110) needed more of a spotlight. Anyway, that’s the deal with the Updates. Summer 1985 had TWO of them. I need a scanning sherpa….