The Wanderlust issue begins with  a fantastic illustration of the BR Air Corps on bivouac in North Africa. The bi-plane on one side, the company flag with a star on the flagpole…such a nice touch, why didn’t they sell flags along with aviator scarves and flight helmets?   There are many nods to civilized life….a clarinet on the music stand in the tent and a huge bag of fresh Kenya coffee beans. Patricia Ziegler is painting a refreshing ocean scene (a mirage, perhaps?) as a Mel dons a pith helmet and prepares to venture forth to explore the mysterious ruins lost in the desert sands. Classic and fun. The Summer 1985 No. 23 mark is a little hard to find (it’s on the camel’s hump).

This recalls many similar covers, including spring 1981 (Check the Stars and Banana hood ornament on the jeep), but for the first time the artist is not BR staff. Chester Arnold, a renowned Bay Area painter was hired to paint this cover (he would also do Christmas 1986) Arnold was well known locally at the time and has since become only more accomplished and interesting. 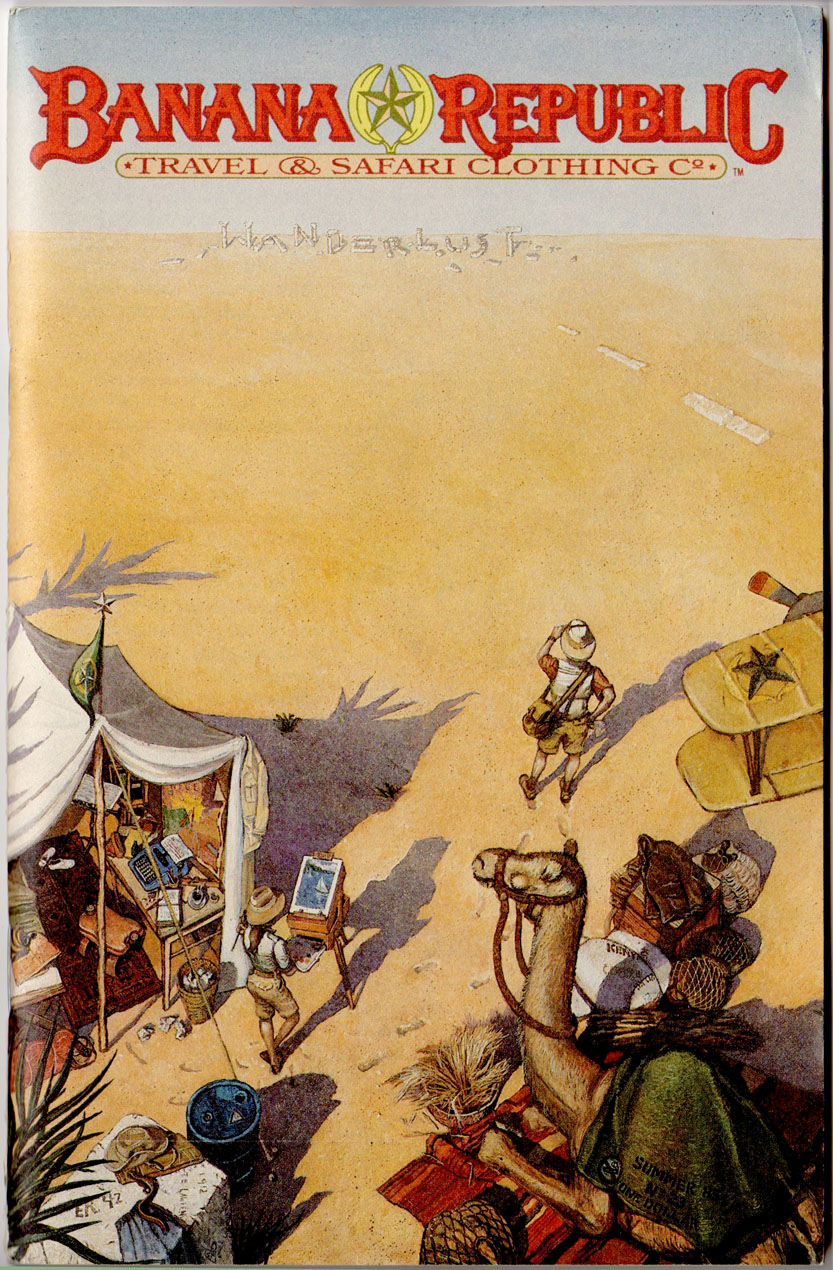 The first 2 pages of the Wanderlust issue contain the introduction from Mel and Patricia and the Wanderlust Hall of Fame. The Correspondent’s Jacket makes it first appearance in the prominent location of page 2 of the catalog. Chester Arnold’s credit and bio is here as well along with the West African hat, the more expensive and version of the similar French Army Bush hat. 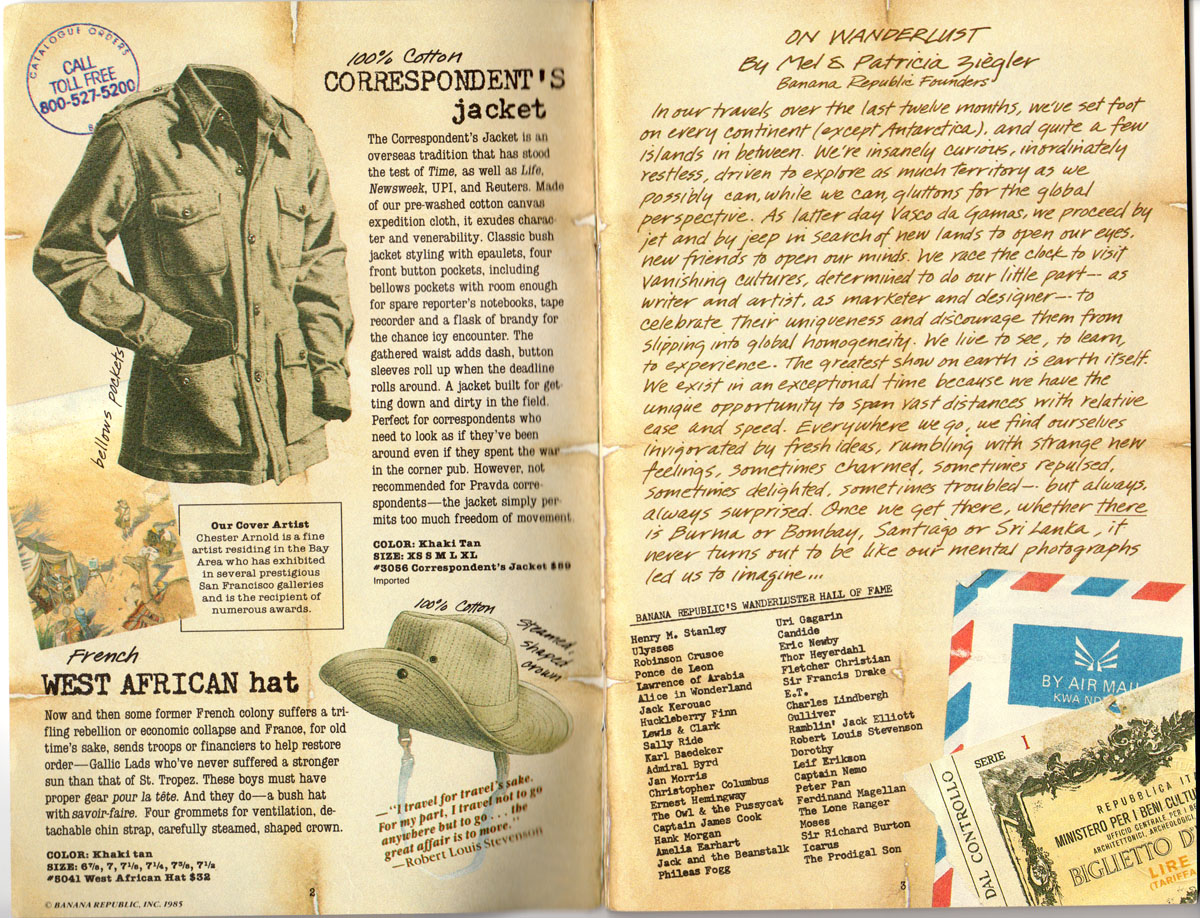 This issue is not devoted to a travel journal, Spring 85’s journey to the Amazon having only recently concluded. Instead, the catalog is sprinkled with various odes to traveling by artists and writers and journalists. This is in addition to the regular product testimonials as seen here. I thought at first that the Herbert Gold testimonial as recycled, but he actually comments on a few different items through the catalogs. The write-up of the vest is a surprise deviation. In most catalogs from 1983 to 1988 the text is usually the same…”A good bush vest is an excuse for it’s pockets, and this one is just that: a walking desk with a pocket for everything.” 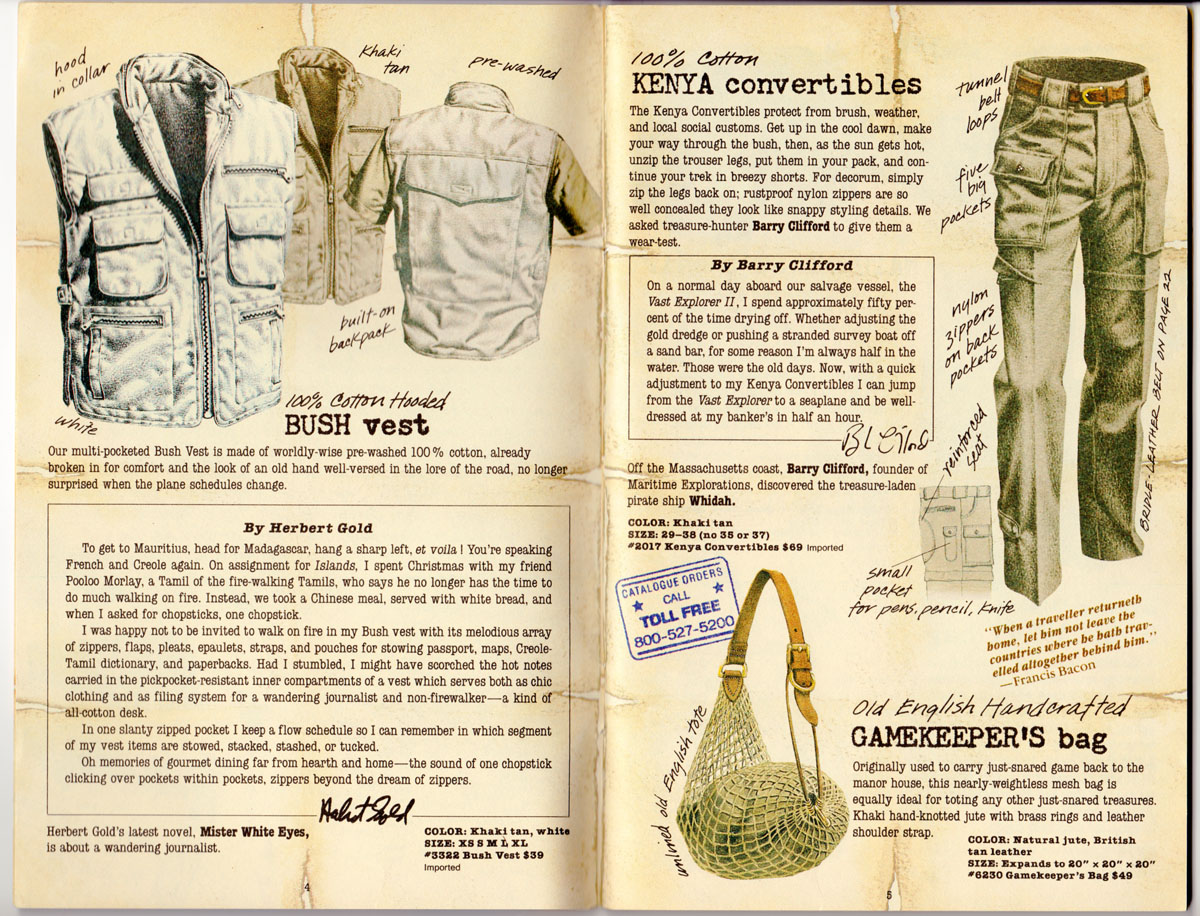 I don’t have a lot to say about this one other than I get confused with the Naturalist’s shirt, the Populist shirt, the Expedition Shirt, etc….That, and the Solidarity bag must’ve been a real sock in the nose to the Soviet empire. 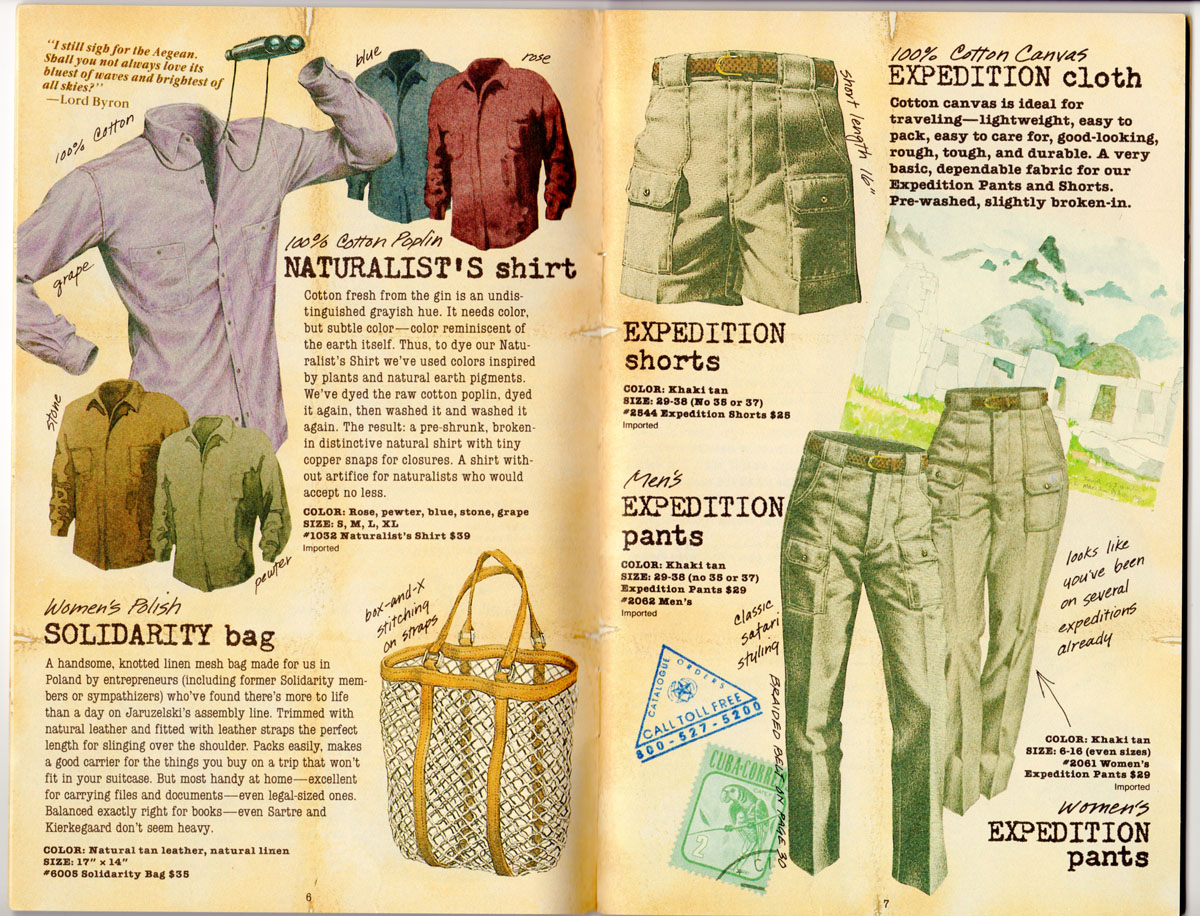 These Wanderlust shirts are interesting. They don’t seem to have been offered for very long, I have no recollection of them and have never come across one on eBay. Also of note is the Swedish Bandolier is no longer Swedish, but I can’t imagine they changed their sourcing, it must be the same item renamed. These seem to have been surplus Swedish Mauser bandoliers which were used by another famous Mill Valley resident in a little film called Star Wars. The Tusken Raiders (Sandpeople) wore them. Please tell me that the Zieglers hooked up George Lucas with surplus gear. 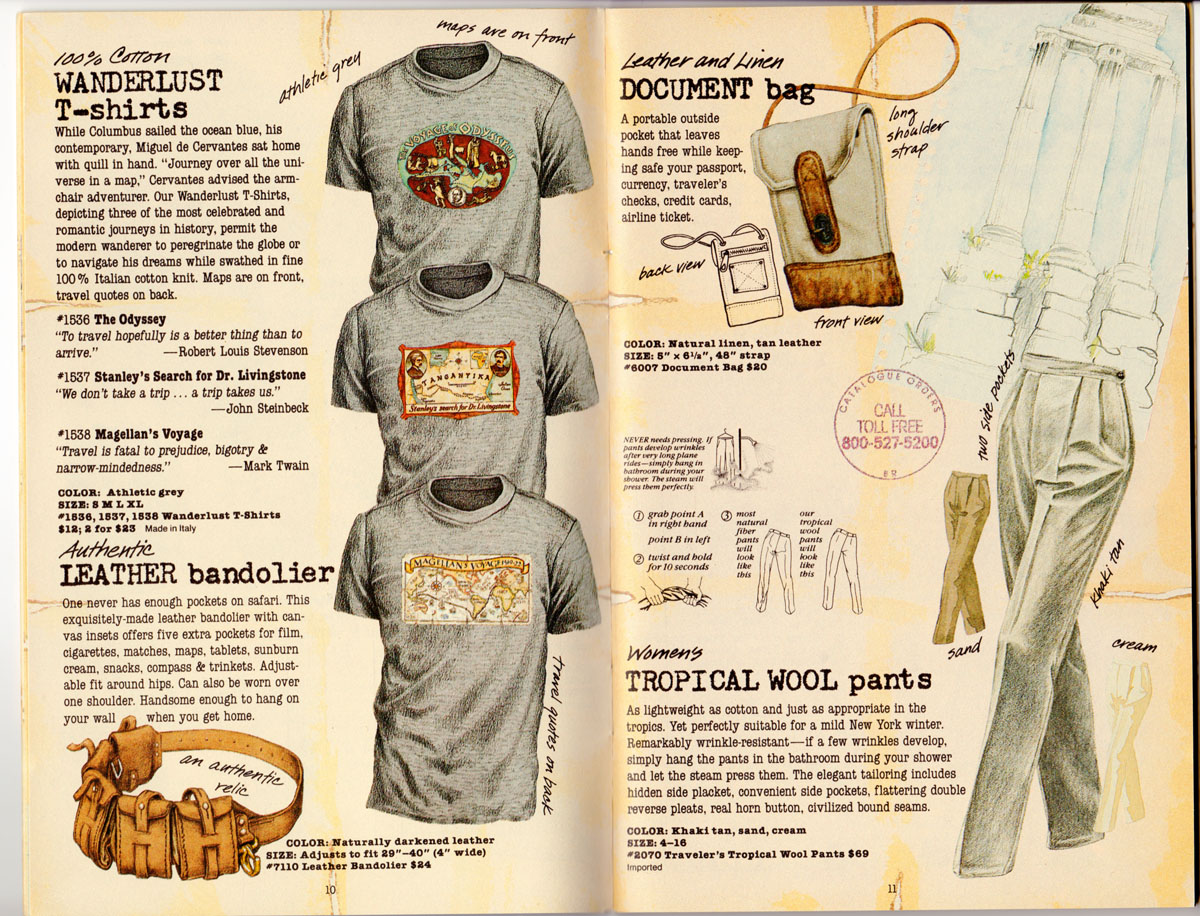 Pages 12 and 13 present us with the familiar wardrobe couple and a very interesting development: The first ever Banana Republic Safari! This is really fascinating to me. Here was an opportunity to go on a safari that is planned by the Zieglers and inspired by the 1984 trip. Four 15-day trips to Kenya and Tanzania are offered are offered at a cost of $2950 (airfare not included). I’m very curious to know if these trips actually happened. Did they sell? I don’t think that was offered again in later catalogs so I have my doubts it was a success, but who knows. Was there a cool commemorative t-shirt?  I’ve got emails out to some people who might know more information. I’ll let you know what I find out. 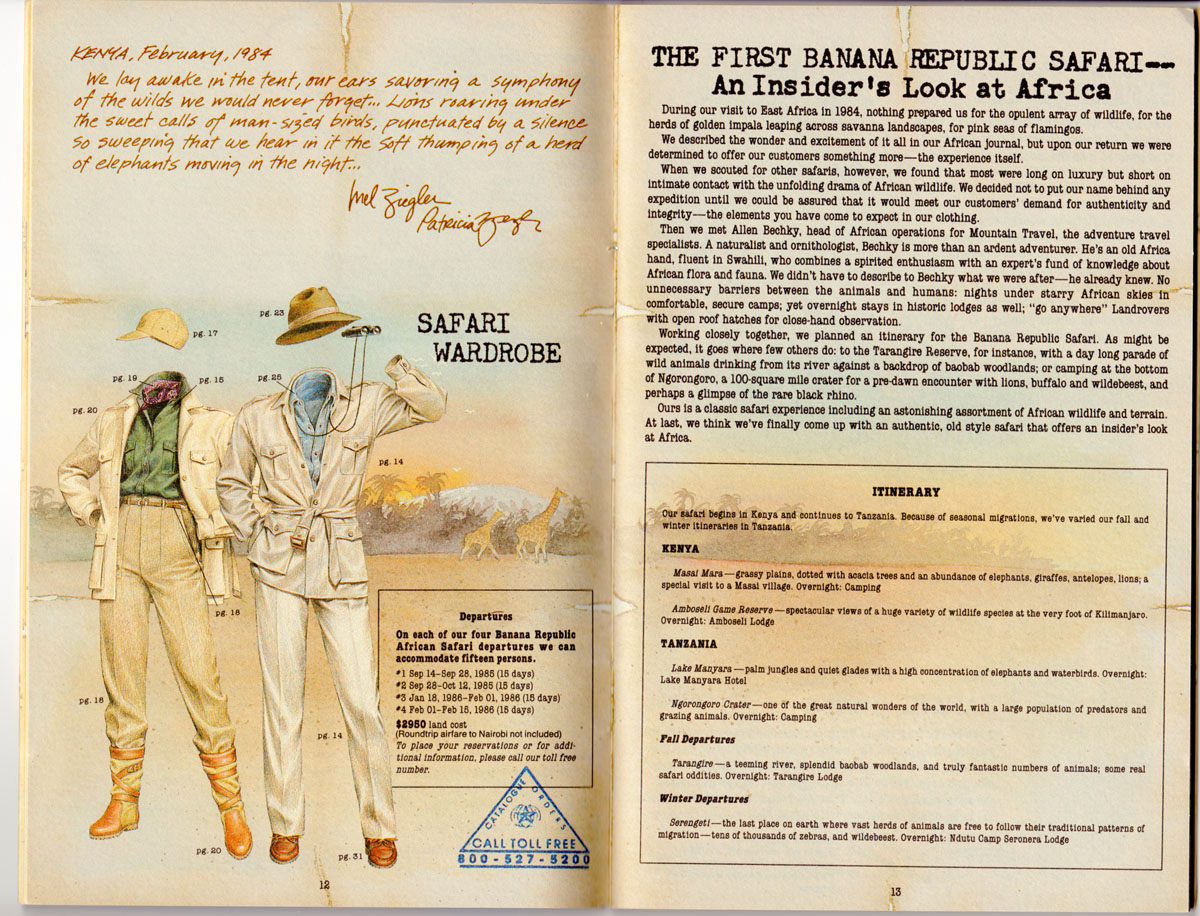 Can I be real honest? Despite my obvious passion for the classic BR Safari and Travel Clothing Co. the one item I never really wanted was the classic Safari jacket, which is pretty much the bedrock of the whole thing. It’s just a tad too costume-y for me. I’d constantly be asking myself who the hell I thought I was. On another note, I dig the pencil work on the ladies safari shirt. Nice drawing… 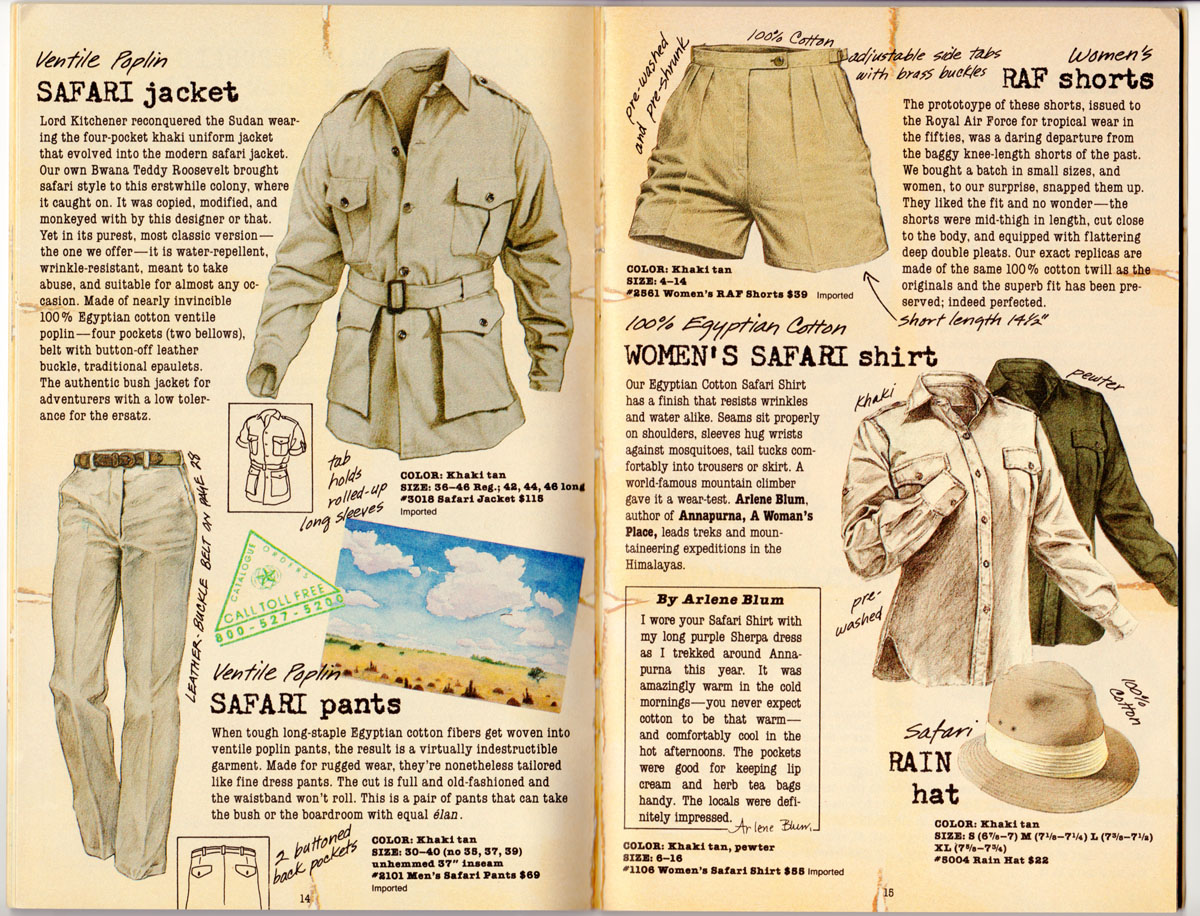 While I’m not venturing forth in a safari jacket myself, this is one costume I wouldn’t mind being seen with. I’m on record for loving these boots ( I saw someone bicycling down the street in them the other day, true story). This shirt skirt combo is pretty hot, and the bolo tie just pushes it over the top. 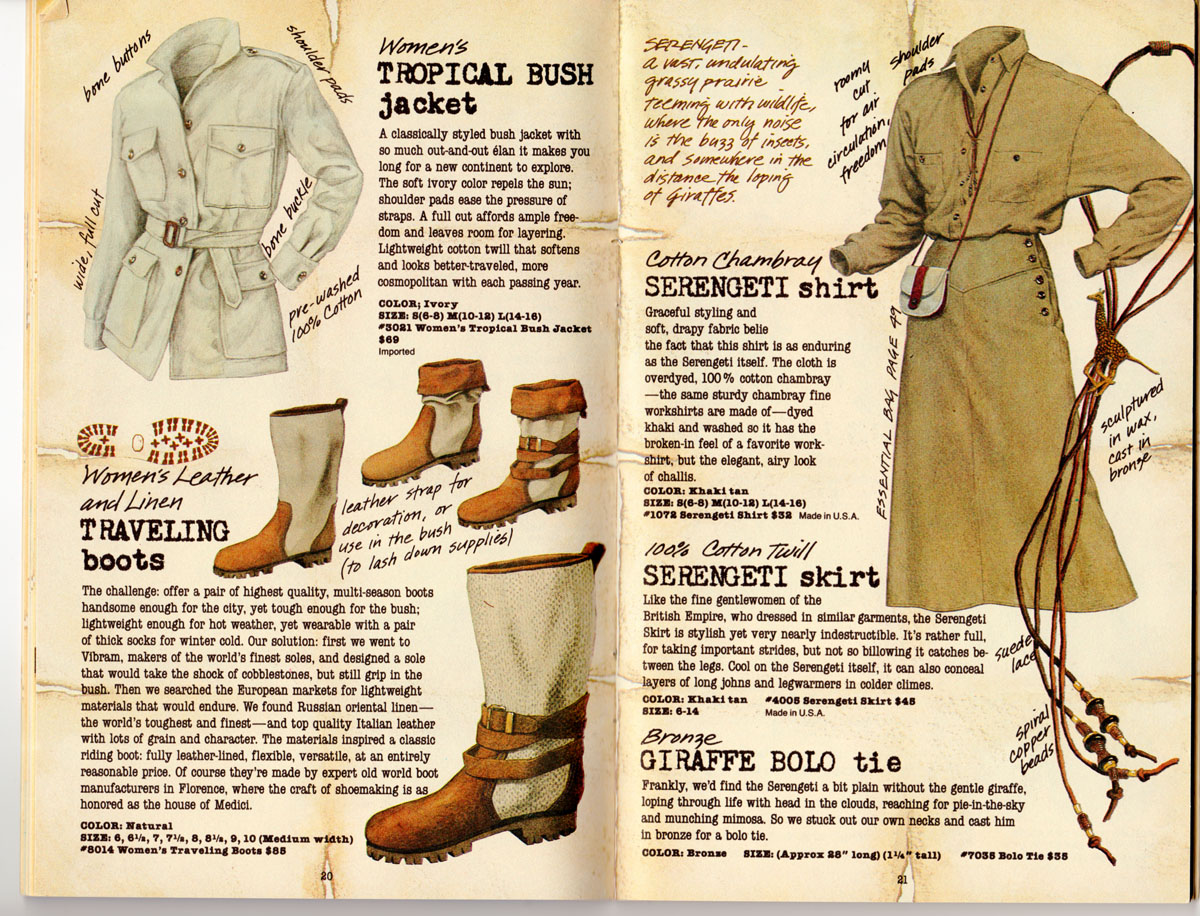 Here’s a big experiment in wardrobing, you don’t usually see this done so extensively in the catalogs. Everything you need for a two-week European Tour. Some really superb and slick illustration that really pushes the “Invisible Man” effect. Art Director Terry Stelling and Production Artist Mike Madrid worried that when the figures started holding glasses and binoculars it was getting to be ridiculous and a little too much like the movie “Topper”. 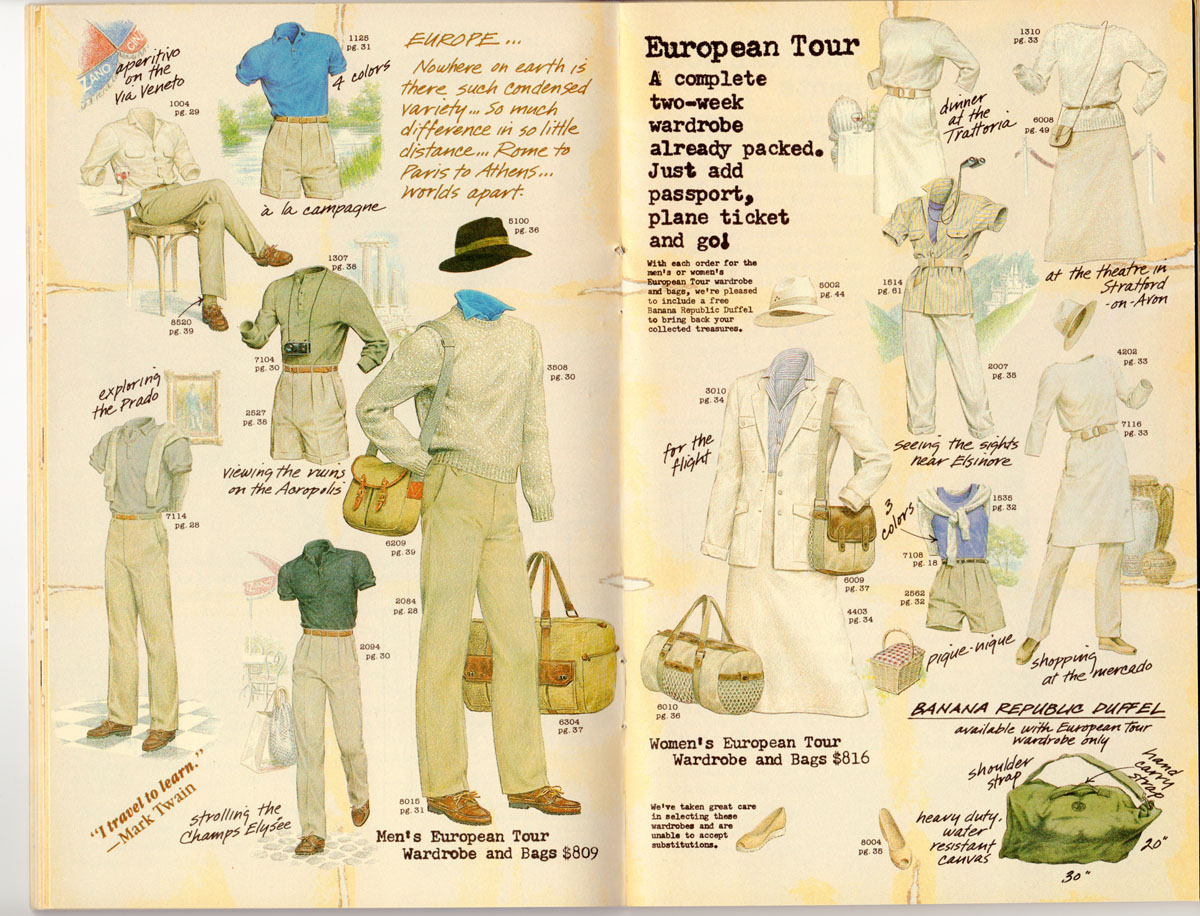 I declare Mombasa Suit to be one of the coolest names for a garment ever. It sounds like something from a Warren Zevon song. “I could tell by the bulge in her Mombasa suit she was armed and glad to see me/ As we shot our way out of the Ministry she said let’s stop over here for tea…” 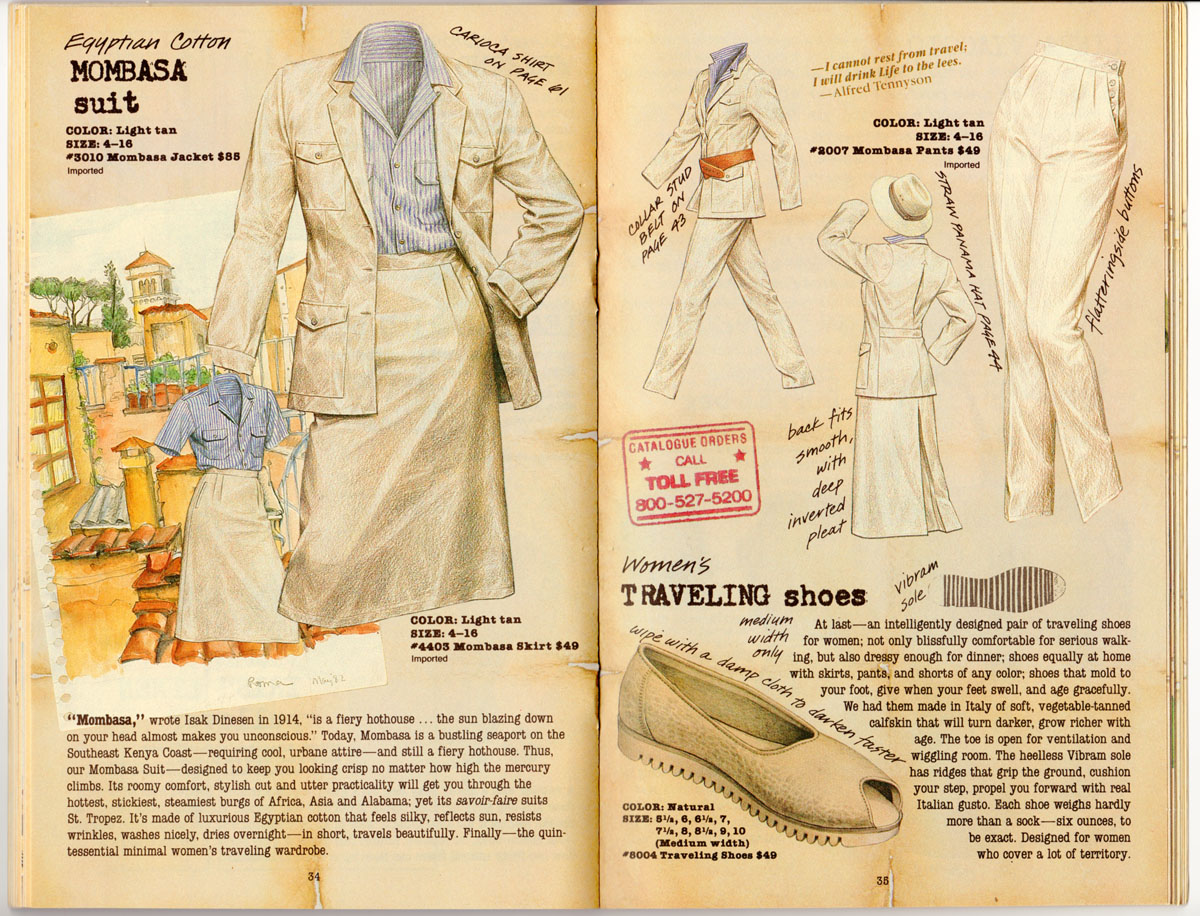 I love the color palette of these shirts and t-shirts, I loved it when they lined up a half dozen t-shirts or yukon shirts in all the different colors. It was like picking from a  candy jar. Gotta have at least 3 different colors, right?  Papaya, Peacock, Raspberry, Grape….PARROT! 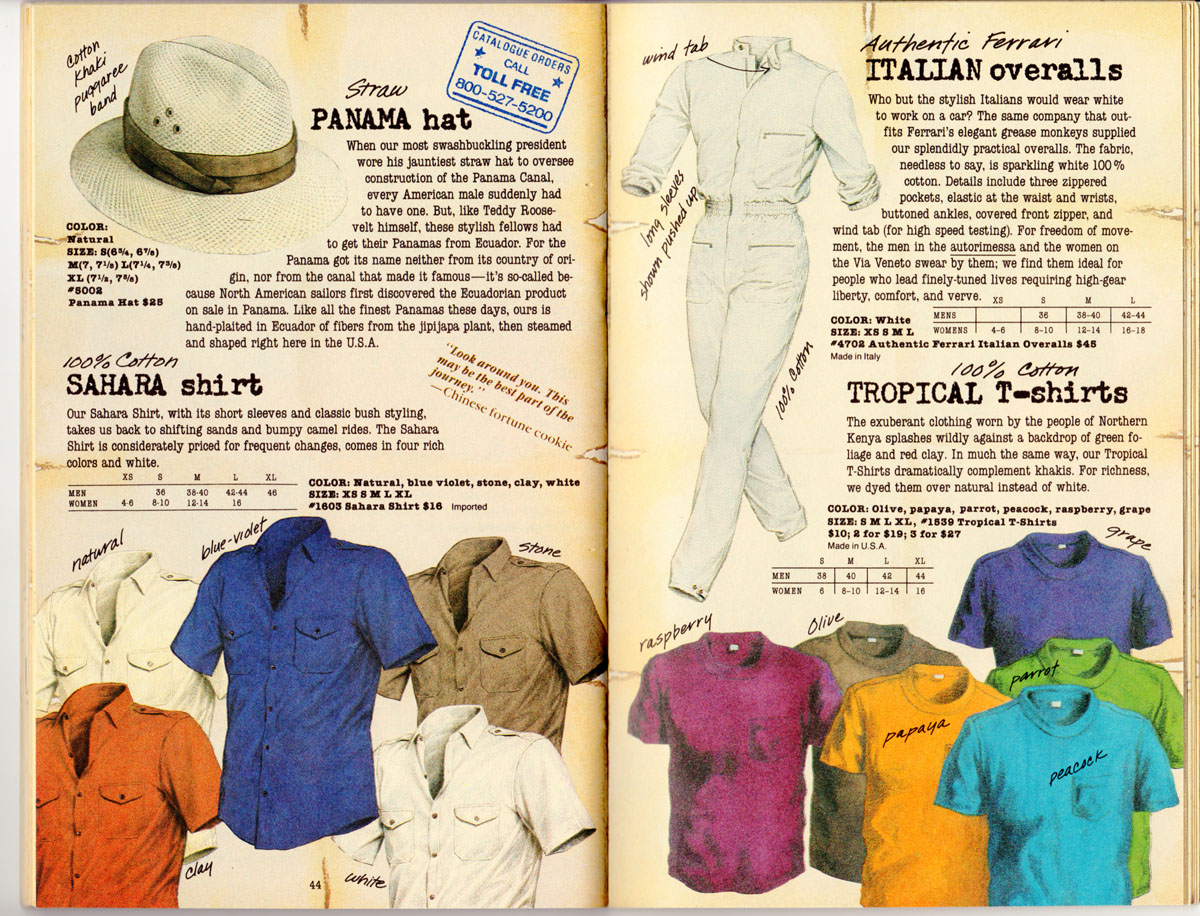 Take a moment and ponder the unusual and interesting Gurkha shorts. They seem to have been very popular, I remember having a pair. They were quite a thing to wear, that big wide waist belt was such a statement. Gurkha shorts were one of BR’s oldest items, originally a surplus item, Kevin Sarkki remembered drawing for the catalog seated next to a massive, musty bales of imported surplus shorts. And now in 1985 they have sold out of surplus and are making their own—in the U.S.A. That’s quite a story. 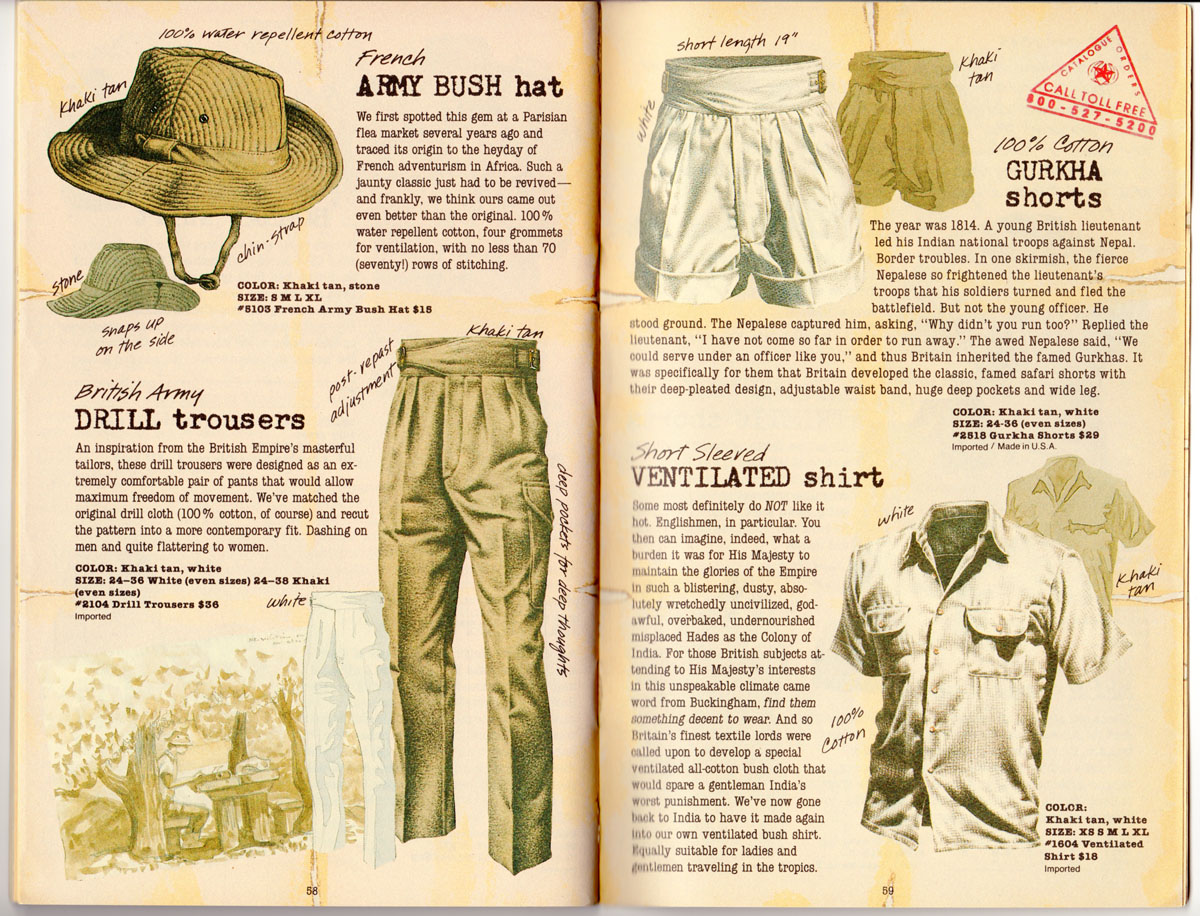 The Wanderlust issue ends with an emphasis on women’s clothes with the adorably named Le Shirt and Banana Republic’s lounge-pants-before-they-were-called-lounge pants “Pants to Come Home To”. 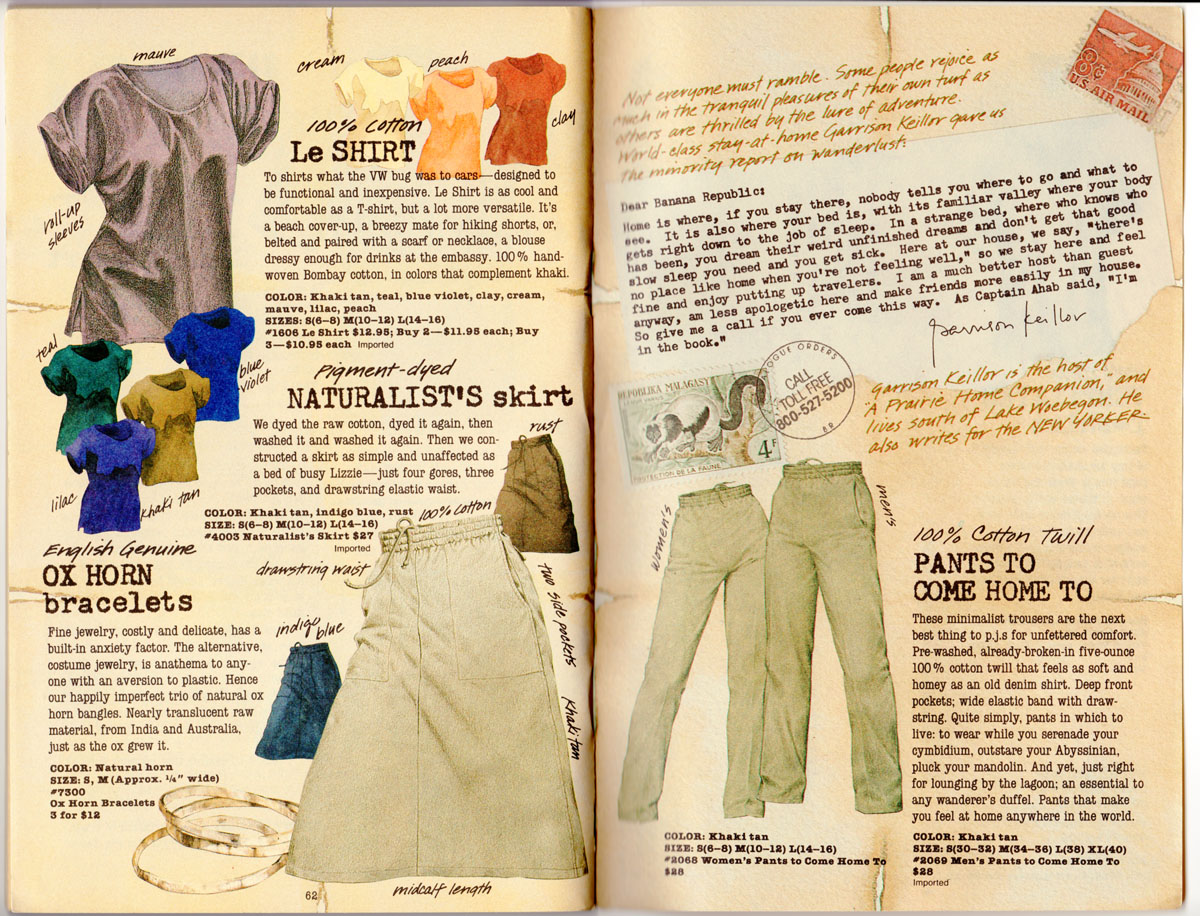