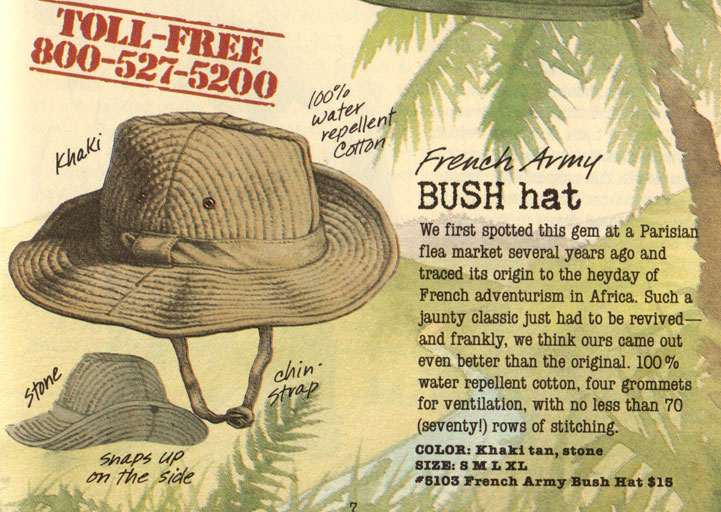 Another staple item in the Banana Republic arsenal, the French Army Bush hat was a relatively inexpensive and popular item. Nothing quite topped off a Hooded Bush Vest better. Introduced in 1983 and sold until 1988 and then even beyond the Safari era. It was sold in three colors, Khaki, Khaki Tan and Stone. I’ve seen some that look Ivory but I don’t know if that’s from fading or what.

From the Fall 1983 catalogue: “We first spotted this gem at a Parisian flea market several years ago. Although we traced its origin to the heyday of French adventurism in Africa, we never could track down the hats themselves. A tip sent us to Jerusalem, where indeed, we learned the Israeli Army had bought up the whole lot of them. But our tenaciousness did not enamor the Israelis. “Not for sale” they told us, until finally we threw up our arms and said “Okay, already.” We then flew off to Hong Kong with our single hat, and had one of the best factories in the Crown Colony reproduce it stitch for stitch. The result: our premier bush hat. 100% water repellent cotton, four grommets for ventilation, with no less that 70 (seventy!) rows of stitching. The hat can be snapped up on the side, and a chinstrap secures it while you’re in a jeep or on a camel. We frankly think ours came out even better than the original.”